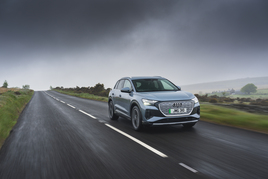 Tusker has reported that the Audi Q4 e-tron was its most popular salary sacrifice car, with battery electric vehicles (BEVs) or hybrids accounting for every model in the leasing firm’s top 10.

The BMW iX3 and Hyundai Ioniq 5 electric were the second and third most popular vehicles ordered, rescetively, followed by the Kia Niro and the Mercedes-Benz A Class (PHEV) – see full listing below.

The change in driver demand is clear, with petrol and diesel vehicles having been replaced entirely by EVs, thanks to the shift in mindset from drivers, as well as the affordability and convenience of a salary sacrifice scheme, says Tusker

Paul Gilshan, CEO of Tusker, said: “The shift in ordering behaviour away from petrol and diesel-powered vehicles, towards EVs has been rapid, and conclusive.”

The 2019 top 10 list was made up of mainly petrol and diesel-powered superminis and hatchbacks, with only one EV, the Tesla Model 3 listed.

Recent Tusker research showed that the vast majority of their drivers would not have opted for an electric vehicle had it not been for the salary sacrifice scheme.

In 2019, nine out of 10 of the most popular vehicles were petrol or diesel powered, with only one EV making the list, however by 2021 the reverse is now true.

Gilshan continued: “We have seen the rise in uptake of salary sacrifice schemes, alongside the continuation of low BIK rates that encourage drivers away from traditional fuel types and into affordable and environmentally friendly vehicles.”

Tusker, however, says it is also aware that some drivers are not quite ready for electric particularly those that can’t have a charge point at home or their annual mileage is too high.

This, it suggests, makes PHEV vehicles a perfect stepping-stone to electric and the Mercedes A Class PHEV remains popular for the second year running. In fact, 17% of Tusker’s orders were for PHEVs in 2021, and 73% were for BEVs.

As a result of this change in buying habits, Tusker has lowered its average order emissions from 107.9g/Km, to just 36.6g/Km in two years and is well on its way to achieving a zero-emission fleet by 2030.

Most popular salary sacrifice vehicles in 2022