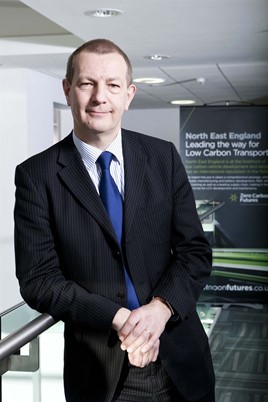 Fleets considering electrification should “stay calm” and take a considered decision before making the move to EVs.

That was the message from Dr Colin Herron (pictured), managing director of consultancy Zero Carbon Futures and visiting professor at Newcastle University, to delegates at the recent virtual Fleet 200 meeting.

“My honest opinion and what I say to local authorities and is just stay calm and look at where you’re delivering,” says Herron.

“So if you’re delivering in the zero emission zone in London and you’re being charged £20 a day to go in, that will change your habit.

“If you are delivering around rural Northumberland I would stick with what you’ve got, quite frankly.

“I really don’t see the point of giving yourself and your drivers a massive amount of pain at the moment when there is no viable alternative .”

He said: “I hear the statement ‘there’s not enough infrastructure’ many times and I always respond with a question – how much do we need? Can you tell me by type and by location?

“And in nine years of doing this, nobody has given me that answer because it’s just too complicated.”

An example of this was reporting by the Mail Online. “At one point it said charging an electric car at the same time as boiling your kettle will blow your fuse,” he said.

“It’s interesting because I’ve had a full EV for seven years and am still boiling kettles.

“The Mail Online said, in 2015, it could be anything from seven to 26 million EVs on the road. It’s going to be quite interesting building a business plan for infrastructure with a variance of 19 million vehicles.

“Writers said we need between one million and 2.5m new charge points by 2040. Another report said we’re going to have a million EVs on the road by 2020.

He added: “One of the big problems we’ve got is that there is no national plan for infrastructure – we are carpet bombing the UK with infrastructure.

“Nobody knows how may charge points are going into the ground. The only time is it known is when the DNO makes the connection and somebody tells Zap Map.

“I’ve seen Morrisons put them in and then across the road Shell stations are putting them in.

“Bizarrely, the more that go in, the less viable they are and the more expensive they are to maintain.

“We are still talking around £25,000 to put one in and they are being used once or twice a day. And the average take is between nine and 14kWh, so they are only delivering about £2.50, £3 worth of power.

“These will not survive unless there is consolidation of the networks and there is an additional package where people will get other things like utility bills included.

“So it’s all being shaken out now and it will become clearer in the future.”

> The above was shared with Fleet News at the July meeting of the Fleet200 Executive Club.