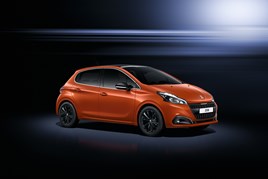 Company Car in Action is a “key event on the fleet calendar”, according to Peugeot’s fleet director, who will be using the event to showcase the latest version of the 208 as well as other key models in the range.

The latest version of Peugeot’s best-selling model, the 208 hatchback will be available for drives, giving attendees at the event at Millbrook Proving Ground, Bedfordshire, their first chance to get behind the wheel of the updated car.

The 308 range will also be on the stand in the latest fuel-efficient BlueHDi diesel and PureTech petrol engines, as well as the range-topping petrol and diesel hot-hatch GT variants.

Echoing the looks of the high-performance GT models, the other 308 hatchback and SW models will be available in GT Line specification, although their power outputs are in line with typical fleet duties.

Another model in the 508 range gained an additional powertrain following last year’s facelift. The 508 RHX had originally been only available as a diesel-electric hybrid. Now customers can choose it with a 2.0 BlueHDi 180 diesel as a front-wheel drive model as an alternative to the Hybrid4, and this model will also be available for drives.

The Partner Electric van is also in the line-up, as well as Peugeot’s 108 city car.

At the other end of the spectrum, Peugeot’s high-performance flagship, the RCZ R 1.6 THP 270 will also be available for drives. Its CO2 emissions of 145g/km are perhaps surprisingly low given the 270hp power output.

Martin Gurney, fleet director at Peugeot, said: “Company Car in Action steadfastly remains a key event for Peugeot on the fleet calendar; it’s a great opportunity for us to meet face-to-face with real decision makers and promote our latest and best ever range of vehicles in an environment where customers can really put out qualities to the test.

“In 2015, among many other models, we’ll be featuring the award-winning new 308 in its many-evolving guises, along with our new 108 city car and our recently-enhanced, best-selling 208 range.”

Cars and vans at Company Car in Action are available for testing on circuits at Millbrook purpose-built for appraising road vehicles, giving attendees the freedom to test models back to back in a controlled environment and helping them make informed decisions on which models to add to their fleets.