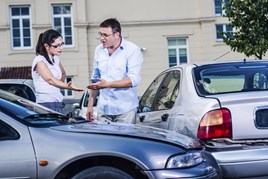 Almost 10% of all accidents over the past 12 months involved new 15 and 65-plate vehicles according to a study by Accident Exchange.

Accident prone drivers tended to prang their brand new pride and joy on the 57th day after the car was first registered, when averaged out. Putting those cars back on the road is estimated to have cost nearly £402 million in just 12 months.

In fact, 32% of all 15 and 65-plate accidents happened within just two months of ownership.

The crash statistics recorded by the accident management firm occurred between March, 2015, and the end of February, 2016. With an estimated 2.2 million accidents – minor and serious – occurring annually, that implicates 196,000 2015-plate vehicles.

The average cost of accident repairs is £2,050, meaning all 15 and 65-plate crashes cost drivers and insurers £402 million.

Scott Hamilton-Cooper, director of operations at Accident Exchange, said: “Any accident is a traumatic and emotional experience for the driver and passengers, but this increases for those driving brand new vehicles usually costing a lot of money.”

The study examined 35,800 incidents recorded by Accident Exchange between February 2015 and January 2016.