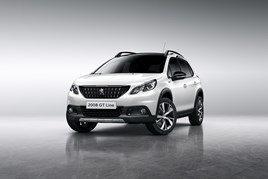 The latest Peugeot, Citroën and DS models will be out in force at Company Car In Action, providing visitors with first drive opportunities as well as the chance to get up close to future vehicles.

Peugeot will be offering the first driving opportunity in the recently revised 2008 compact SUV, which has been updated with a more rugged look, new engines and equipment as well as a new GT Line model.

Citroën’s return to the event is marked by the appearance of a fun electric model based on the C4 Cactus. The E-Mehari is an open-top fully electric car, with a 124-mile maximum range between charges, and showcases what Citroen sees as the potential for combining its traditional quirkiness with electric powertrains.

While there are no plans yet to bring the E-Mehari to the UK, it is already on sale in some European markets, and Company Car In Action on June 14-15 is seen as an ideal event to gain feedback from customers on feasibility for the UK.

Both Citroën and Peugeot will show their latest medium panel vans as static display models. Unveiled at the Commercial Vehicle Show in April, the new Citroën Dispatch and Peugeot Expert promise greater ability and better efficiency than their predecessors.

DS will be making its first appearance at Company Car in Action as a brand in its own right, and will have cars from all three ranges to drive. The DS 3 will be available in diesel hatchback and petrol cabriolet variants, the new DS 4 Crossback diesel will be on the stand, while the DS 5 will be present in the range-topping diesel hybrid version.

Company Car In Action is held at Millbrook Proving Ground in Bedfordshire, with vehicles available for driving on one or more of four different routes, each purpose-built for evaluating road cars.

A twisty hill route allows drivers to appraise the handling and responses of vehicles, including engine torque and braking performance; the high-speed bowl simulates motorway conditions, allowing drivers to assess comfort and noise intrusion; the city route is a low-speed course with the opportunity to test manoeuvrability; the off-road route is open to 4x4s.

Fleet decision makers can register for their free place at www.companycarinaction.co.uk