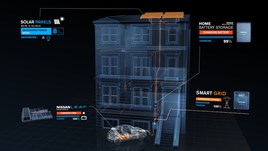 Nissan is looking for fleets and company car drivers to join a trial for a new ‘vehicle-to-grid’ initiative later this year.

The trial, in partnership with energy provider Enel, will enable up to 100 drivers of Nissan Leaf and e-NV200 to give energy from their vehicle battery back to the UK grid, providing a sustainable source of power, while helping the drivers to save and make money.

The initiative assesses the energy levels in the vehicle and, depending on the power requirements, will either suck electricity from the grid or transfer it back. Drivers would be paid for contributing to the grid.

Jim Wright, Nissan Motor (GB) managing director, told Fleet News: “This could make the running of the vehicle free – it’s an illustration of the technology that is available today.”

The trial is due to start in September. National Grid will be closely monitoring the process to help it to understand the implications on demand if a significant proportion of the vehicle parc is run on electric power.

Wright moved to allay fears that customers’ cars could be left without any charge if the electricity is pulled back into the grid at peak hours.

“Grid balancing can only be a matter of seconds, not over a long period of time,” he said. “For example, you charge the car overnight and the grid automatically takes power from the car when it needs it during the day.”

However, fleets might need to take earnings into consideration when reimbursing for business travel to ensure the driver is not being paid twice for the electricity.

The potential to earn money is even greater for vans which are parked at the depot overnight; the money would then be returning direct to the company rather than the driver.

They could make as much as £1,000 a year per vehicle if G2V was used every night. The only issue to consider is the effect of the continual use of rapid charging for the batteries, which could reduce their life by up to five years (from 20).

Nissan has also revealed details of a new residential energy storage system called xStorage which can complement the G2V process or simply act as a way for consumers to store cheap energy to use to power their homes at peak times.

xStorage is a partnership with Eaton. It uses recycled Nissan batteries and will be sold from September at an installed cost of £3,000 with the promise of saving at least £6,000 over a 10-year period. The box lasts up to 15 years – although that reduces if it is in continual use.

In theory, it could also be used to power any electric vehicle (EV) not just Nissan Leafs. Eaton estimates sales of 100,000 across Europe within five years.

The financial model works by charging the car at night using cheap, off-peak electricity which can then be used to power the home – potentially for a couple of hours – or fed back to the grid during peak-price times. Homes with solar power can also store that energy in the xStorage box.

Eaton also makes a larger industrial box for business use, costing around £5,000.

Both xStorage and G2V will provide Nissan and its partners with insight into the changing use of vehicles. National Grid, in particular, is keen to understand the role EVs could play in supporting the power infrastructure.

“As the company that has sold the most EVs, we are demonstrating how we have thought about this in an innovative way,” Wright said. “It goes beyond the car.”

The UK is Nissan’s third biggest market for EVs; last year it sold around 5,100 Leafs and 900 e-NV200s and it expects volume to grow by 10% this year. Jim Wright said the company currently had more e-NV200s out on demonstration than any other car or van in  its line-up.

“Fleets were buying in their ones and twos,” he said. “Now it’s in the 10s and 20s. A lot of the interest is from  public sector and large corporates.”

Wright said Nissan had other EVs models in the pipeline. They would not come to market within the next year although they were “not that far away”, he added.