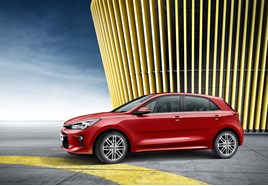 Kia expects to exceed its registrations target for this year but insists that it will be achieved with a better balance of sales into retail and fleet, not by forcing the market.

It is now likely that the benchmark threshold of 100,000 units could be hit earlier than its original 2020 target, potentially by 2019.

Paul Philpott, Kia Motors UK president and CEO, said rental registrations had been reduced by 10% in the first eight months of 2016, while retail and fleet were up 17% and 19% respectively. This “rebalancing”, as he calls it, was possible partly due to the success of the new Sportage in the retail and fleet markets. Year-on-year, Sportage sales are up 55% with 60% heading to fleets.

“It’s had a good start in contract hire and is taking exciting conquests from premium and volume brands,” Philpott said.

“We will exceed 84,000 units now and will end up past 88,000 with a 50-50 mix of fleet to retail. We have a good order bank for Sportage and Niro for quarter four, which is always the toughest quarter of the year.”

“We hit the market with a crossover and hybrid at the right time,” Philpott said.

While the focus this year has been about Sportage and Niro, in 2017 the spotlight will switch to smaller cars with the launch of the Rio in Q1 and the Picanto in Q2.

Both cars enter a market expected to undergo a period of uncertainty, although Philpott also points out that a lot of activity by manufacturers this year has been in rental and employee registrations to push up their totals. The SMMT is forecasting a 6% reduction next year, but Philpott is confident of “modest growth” for Kia to offset any market decline.

In the run up to that milestone, Kia will be assessing its next target. “100,000 has always been a rallying cry to give our dealers a perspective of what we can achieve with a sustainable business,” Philpott said. “We will continue to grow up to the stage where our business and our dealers’ businesses are still profitable.”

More models will be launched into new sectors with an increasing range of powertrains. Kia covers around 80% of the market; it plans to fill another 10% over the next couple of years with a Nissan Juke competitor not ruled out.