Demand for diesel cars fell by more than 21% in August, while registrations of conventional petrol vehicles grew by almost 4%, according to figures released today by the Society of Motor Manufacturers and Traders (SMMT).

Petrol hybrid and pure electric vehicles (EVs) also increased substantially, up 74.9% and 62.5%, reflecting a shift away from diesel previously highlighted by Fleet News.

Fleet and business registrations were down almost 4% for the month, compared to August 2016.

However, with more than 76,000 new cars registered, the performance still represents the third biggest August in 10 years. Year-to-date, the market remained broadly in line with expectations, down -2.4%.

Mike Hawes, SMMT chief executive, said: “August is typically a quiet month for the new car market as consumers and businesses delay purchases until the arrival of the new number plate in September.

“With the new 67-plate now available and a range of new models in showrooms, we anticipate the continuation of what are historically high levels of demand.”

Superminis and small family cars remained the most popular types in August, accounting for more than half (58.3%) of registrations. However, SUVs, larger family cars and executives were the only segments to grow, up 7.9%, 2.2% and 1.1% respectively.

Andy Hartley, commercial director at Lex Autolease, said: “Given the uncertainty over Brexit and the impact on consumer confidence, it is unsurprising to see that August registration volumes have fallen compared to 2016. It will be interesting to see what actions manufacturers and retailers take during the important September plate change month to attempt to recover some sales momentum.”

Chris Bosworth, director of strategy at Close Brothers Motor Finance, added: “With Brexit negotiations well underway and the Government announcing radical changes to the sale of fossil fuelled cars, the motor industry is entering a wave of prolonged uncertainty. This will likely have an impact on consumer spending habits. The Bank of England has already announced that car finance deals have eased as a result.” 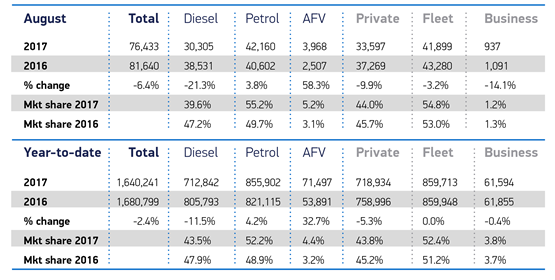 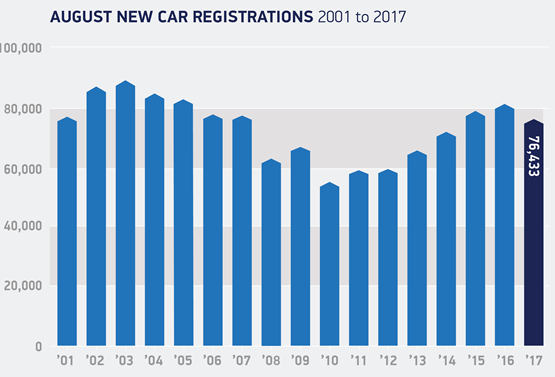