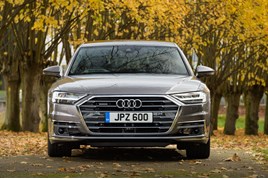 Audi is ready to sell the world’s first Level 3 autonomous car, the A8 luxury saloon, but it cannot enable the self-driving features in the UK due to current legislation.

When active, the AI Traffic Jam Pilot takes charge of driving in slow-moving traffic, controlling all necessary driving functions, up to a speed of 37mph.

It will be the first technology that could enable a driver to perform other tasks in the car and not pay attention to the road, as it can handle starting from standstill, accelerating, steering and braking in its lane.

When certain conditions are met, the driver is notified that they can take their hands off the steering wheel. As soon as the system reaches its limits, the driver will be alerted that they must resume manual control.

The use of this technology is currently prohibited by Regulation 104 of the Road Vehicles (Construction and Use) Regulations 1986, which states: “No person shall drive or cause or permit any other person to drive, a motor vehicle on a road if he is in such a position that he cannot have proper control of the vehicle or have a full view of the road and traffic ahead.”

In its recent consultation, ‘the Pathway to Driverless Cars: Proposals to Support Advanced Driver Assistance Systems and Automated Vehicle Technologies’, the Centre for Connected and Autonomous Vehicles at the Department for Transport (DfT) sought to amend Regulation 104.

Yet in another consultation (Remote Control Parking and Motorway Assist: Proposals for Amending Regulations and the Highway Code), the DfT decided to only amend regulations to allow the use of remote control parking systems.

A spokesperson at the DfT told Fleet News: “A programme of regulatory reform will ensure the safe arrival of automated vehicles. In addition, as announced in last year’s Industrial Strategy, we are carrying out a three-year project with the Law Commission to set out proposals for a long-term regulatory framework for self-driving vehicles.”

The DfT also stated that Level 3 technology is not ‘explicitly prohibited’ but said drivers must obey all current laws when driving any car equipped with an advanced driver assistance system – which, in effect, confirms they can’t be used on public roads.

Chancellor Philip Hammond outlined the Government’s ambition to introduce self-driving cars on the UK roads by 2021 in his Budget speech, although this will initially only allow for testing of driverless cars.

The German Government has changed its regulations already, to allow the use of Level 3 systems, making it the first market to benefit from the A8’s self-driving ability.

Audi expects to roll out the Traffic Jam Pilot system in the UK from 2019.

“It sounds like the Government has only just started ramping up discussions about autonomous cars but it isn’t just about infrastructure and road conditions,” said Dan Marsh, product manager for the Audi A8.

“Liability has not been decided yet. If the car drives by itself then there are still a few things to overcome.

“The technology is there. It’s just waiting on legislation,” he added.

Audi’s system works by using a collection of sensors that scans the car’s surroundings. The central driver assistance controller is a high-speed computer which collates the data to continually produce an image of the surroundings with the help of data from radar sensors.

Later this year, Audi will introduce its smartphone remote parking feature in the UK which allows the driver to exit the vehicle and remotely activate the car’s self-parking system. The car will also be able to move itself in and out of a garage by remote command.

Marsh said: “It is really important for us. We are the first manufacturer with a production car to have these features and we want to capitalise on that.

“It would mean a lot for us to bring that to market first.

“AI and the Level 3 technology is the unique selling proposition of the car. We want to get that out to market as soon as possible.”

Currently, the new A8 features Level 2 autonomous features as standard. Its Adaptive Cruise Assist combines Lane Assist and Adaptive Cruise Control which can effectively drive the car in most conditions. However, the system will disengage if the driver lets go of the steering wheel.

Marsh confirmed that he is working to create an option package which will combine the autonomous features, once available, to make it easier for customers.

Driver assistance: the system is able to take over either the steering or the speed of the vehicle. It supports the driver who remains responsible and must be ready to assume control immediately. Includes adaptive (radar guided) cruise control and lane-keep assist.

Partial automation: in certain situations the driver can delegate continuous steering and speed control of the vehicle to the system, but must monitor the system at all times and assume control as needed. An example is Tesla’s Autopilot system or Volvo’s Pilot Assist.

Conditional automation: the driver no longer has to continuously monitor and can carry out other activities, supported by on-board equipment. The system autonomously recognises when the ambient conditions no longer match the range of functions of the system. In these cases, the vehicle prompts the driver to take over the task of driving the vehicle, with several seconds’ advance warning. The traffic jam pilot in the new Audi A8 will satisfy these criteria.

High automation: systems with level 4 function do not require any assistance on the part of the driver, but their function is limited to a specific area – such as on highways or in a parking garage. In these places, the driver can completely transfer the task of driving to the system. The driver only needs to resume the task when the car leaves the area defined for highly automated driving. If the driver does not react, the system assumes a safe position, e.g. pulls onto the shoulder and stops there.

Full automation: the car assumes complete control. Level 5 systems do not need help from the driver in any situation. Control elements like the steering wheel or pedals are no longer necessary.