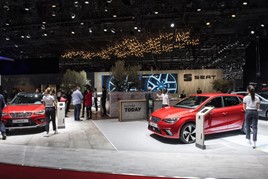 Electric vehicles (EVs) could become a more attractive purchase for businesses in the next few years as car manufacturers strive to meet average emissions targets.

Car manufacturers are required by the EU to have an average CO2 of 95g/km by 2021, with allowances for heavier vehicles and credits for ultra-low emission or zero emission vehicles. It follows the average CO2 emissions target of 130g/km set in 2015.

Manufacturers are required to pay fines for exceeding the targets, but many have stepped up their plans for electrified vehicles in the next few years to ensure sales offset those of cars above the target figure.

Seat chief financial officer Holger Kintscher believes the brand, which reports its average figures within Volkswagen Group, is on target for 2021, but it will be helped by the introduction of a plug-in hybrid powertrain in the new Leon range, due in 2019, as well as a new, pure EV in 2020.

Kintscher promised the new EV, which would be slightly roomier than the current Leon inside, but is essentially a lower-medium hatchback, would be no more expensive to buy than an equivalent car with a conventional engine.

Seat will be the second Volkswagen Group brand to use the new EV architecture, known internally as MEB, and the car will have a theoretical range of up to 300 miles.

Kintscher said the car would be attractively priced to help Seat meet its 2021 target on average CO2 emissions.

Speaking to Fleet News at Seat’s annual business briefing, he said “we would rather give the money to customers than to Brussels” in the form of fines.

Other car manufacturers could be taking a similarly pragmatic view if they are at risk of missing the targets, especially if the current move away from diesel new cars is causing average CO2 emissions of new vehicles to rise with a higher proportion of petrol cars being registered.

The new electric Seat will follow the launch of the new Leon, which will be offered with petrol, diesel and plug-in hybrid options, the latter offering a plug-in range of up to 30 miles.

The new cars are part of a product offensive that began with the Arona compact SUV and new Ibiza in 2017, and the new Tarraco large SUV, which is similar to the Škoda Kodiaq and Volkswagen Tiguan Allspace.

The Seat range will be supplemented this year by the debut of the new high-performance Cupra brand, beginning with the Cupra Ateca. These vehicles are also likely to be offered with electrified powertrains where appropriate.

Seat will also launch an upmarket crossover based on the next-generation Leon that will be sold as both a Seat and Cupra, and will be style-focused, targeting drivers currently in cars such as the BMW X4 and Mercedes-Benz GLC Coupé.

The Seat product offensive has been brought about by successive years of growth and profit for the brand.

Its new crossover models, with architecture shared with other Volkswagen Group cars, are likely to drive further success.

The brand, which won Most Improved Fleet Manufacturer in the 2018 Fleet News Awards, has its main factory in Martorell, near Barcelona, which produces the Ibiza, Arona and Leon for Seat and, until 2017, the Q3 for Audi.

From 2017, the plant will produce the second-generation Audi A1, with advantages identified in the supply chain by switching models.

Kintscher said: “It is important to have an Audi model in our factory, as building a premium car shows the level of trust in Seat by the group. But with the Ibiza and Arona in Martorell and the Volkswagen Polo produced in Pamplona, our plant was the most profitable location to select for the A1 with so many local suppliers in Spain and Portugal.”

Kintscher also sees a future for the Alhambra MPV, despite adding a larger SUV to its range in 2017.

Although it would be a decision for Volkswagen Group, with the vehicle also built as the Volkswagen Sharan, Kintscher believes that with 30,000 Alhambra models registered across Europe in 2017, of which 5,000 were sold in the UK, the project could be sustainable through another generation.

High performance Seat models will now be branded as Cupra, as the Spanish brand separates its tuning arm in a similar move to Abarth and DS.

Seat was also highly commended in the Best Small Car and Best Compact SUV categories for its Ibiza and New Arona respectively.