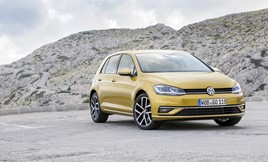 Volkswagen will launch a mild hybrid version of the Golf as part of its strategy to gradually electrify almost every vehicle in its range of models.

The company is offering a first look at the future of electrified drive systems as part of the International Vienna Motor Symposium.

“Electrifying conventional drives will enable us to further reduce consumption and emissions while also increasing dynamics and convenience”, says Dr Frank Welsch, member of the board of management for Volkswagen Passenger Cars with responsibility for Technical Development.

“We are starting this extensive electrification campaign with Volkswagen’s best-selling vehicle to date – the Golf. Our newly developed, cost-effective 48v mild hybrid will pave the way for introducing this type of technology to the mainstream,” he added.

Volkswagen will combine the combustion engine with a 48v belt-integrated starter generator and a 48v battery, in a similar setup to that used in the new Audi A8.

The brand says this sustainable combination "represents the gateway to the future of Volkswagen hybrid models."

Mild hybrids can coast with the engine completely switched off, saving up to 0.3 litres of fuel over 62 miles. They can also provide an electric boost to help performance.

The introduction of 48v technology represents a new chapter in engine design, enabling drives to be electrified in a cost-efficient manner, accroding to Volkswagen.

It enables a considerably higher amount of energy to be saved than the 12v system and enables a number of operations, including the actuation of the belt-integrated starter generator.

The starter-generator performs the role of both an alternator and starter. At the same time, it functions as a small, lightweight electric motor that immediately increases drive torque upon start-up by means of an electric boost.

“The basic interaction of different energy sources – electricity, petrol, diesel and natural gas – represents a paradigm shift at Volkswagen. For the first time, the company will simultaneously offer product lines such as the Golf with conventional, electrically assisted drives as well as product lines such as the ID with purely electrical drives in the future,” said Welsch.

The new Volkswagen e-Golf has been unveiled in a world premiere at the Los Angeles Auto Show.

The updated Volkswagen Golf GTE is open for order in the UK with a significant price realignment, two trim levels and a raft of new technologies on board.

Volkswagen has added a new 1.5-litre TSI ACT engine to the Golf range, which promises fuel consumption of 58mpg.