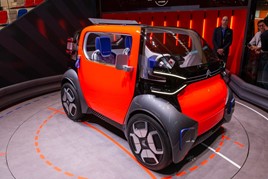 Shared services and user-ship models “changes everything” for Citroen when it is designed and developing new models.

Arnaud Belloni, vice-president marketing and communications, explained: “This business was made 100 years ago on ownership. Now the world is going to renting and leasing. We so are working in this direction.”

He pointed to two key elements to the Citroen strategy.

The first, car sharing, is based on the ‘five minutes, five hours, five days’ concept, which is being built around its Free2Move division. The Ami One concept unveiled at Geneva Motor Show exemplifies Citroen’s thinking of a personalised customer journey focused on freedom of use.

“In London, if you go from Richmond to the east and don’t want to take Uber or the tube, you can utilise Ami One,” Belloni said. “You don’t need four seats, you need only one. And, if you don’t need a driving licence , it is a huge opportunity to open up for more people.”

Citroen’s other vision is around ‘ownership’.

Belloni again: “People are wrong to say there is no future for ownership. There is, but it will be long-term leasing.”

He describes the concept as “like pay TV” where people pay for a basic package but can then add upgrades when they want them. “For example, more power for a month or four seats for a week. This can totally rethink the customer journey.”

Citroen already has car sharing trials in Madrid and Paris with the C-Zero where customers can use the vehicle when they need it. But Belloni also believes there is an opportunity for an AirBnB style proposition, called Earn & Drive, where the vehicle is owned by an individual or business but rented to another user when not required.

“These elements exist and re working. What’s missing is the right object,” said Belloni. “We now have that with Ami One.”

Ami One is an electric concept intended as an alternative to public transport and other modes such as bikes and scooter. With a range of 62 miles and a top speed of 28mph, it can be managed via an app for car share via Free2Move, as a five-day rental, five month commitment-free access and five-hear leasing option with battery, maintenance and parking included in the monthly payment.

Belloni predicts it could be launched in 2020/21, adding: “Ami One will liberate urban citizens.”

Key is the fact that it brings affordable mobility to more people, but Belloni also believes it could offer a last-mile solution for delivery operators in urban areas.

“Cities will all close their centres to trucks – this is already happening in Paris,” he added.

Citroen doesn’t rule out a twin concept, one for urban, one for rural. At the Paris motor show later this year it will reveal another concept, a vision of autonomous long distance travel. This vehicle will have four seats and will address the predictions of population growth in the city which wants to get out at weekends.

“They will use one concept during the week and another at the weekend,” Belloni said. “And your contract will determine what you take and when.”

He added: “If we want to be successful, we have to democratise mobility. We are also going to disrupt. As a car manufacturer, we have to disrupt the way to approach ownership with a shorter user-ship experience.”

Citroën is banking on comfort to set its C5 Aircross apart in the hotly contested C-SUV segment.

Citroen has unveiled its Ami One mobility concept - a two-seat electric vehicle for urban areas.

Ssangyong has revealed the new Korando at the Geneva Motor Show and promises an EV version will be available shortly.