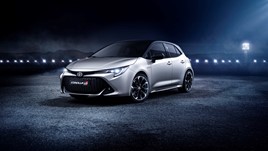 The Toyota Corolla has received a series of upgrades and new model versions for 2020, becoming exclusively a hybrid range in the UK.

The 1.2T turbo petrol engine has been ditched in favour of Toyota’s improved 120bhp 1.8-litre system and the new, 181bhp 2.0-litre hybrid which made its debut with the model.

The dual hybrid strategy – also applied to the new C-HR crossover – gives drivers the traditional rewards of Toyota’s self-charging hybrid technology with low emissions, fuel efficiency and a relaxing drive, plus improved response and, with the 2.0-litre, greater power on demand, effortless acceleration and added fun-to-drive quality, it said.

Corolla is the latest model to benefit from the influence of Gazoo Racing, Toyota’s global motorsport arm, with the introduction of new GR Sport models. These feature design and specification details that give the car a wider, more planted and powerful look and a sportier cabin ambience.

The dedicated styling elements include a sharper design for the lower centre bumper section, a wide honeycomb mesh pattern for the front grille and piano black surrounds for the grille and fog lights.

There is also a black insert in the rocker panels and the new 18-inch black alloy wheels have a contrasting bright machined finish to the tips of each spoke and red GR centre caps (17inch diameter wheels in the same design are featured on the Touring Sports model). At the rear there is a silver insert in the lower bumper, creating the look of twin tailpipes and a diffuser.

The GR Sport cabin is fitted with sports front seats, upholstered in fabric with a dedicated pinstripe pattern and with seatback and cushion bolsters finished in black and grey synthetic leather. It is also equipped with Toyota’s latest multimedia package, including Apple CarPlay and Android Auto functions for seamless smartphone integration.

The new head-up display measures 265 by 70.5mm and presents data clearly in the driver’s line of sight, even in bright light conditions.

The new Corolla Touring Sports TREK celebrates a partnership between Toyota and the internationally renowned bicycle manufacturer TREK. It stands apart from the rest of the range with its SUV-influenced look: the suspension has been raised by 20mm and special exterior styling details have been added, including black edging for the front and rear bumpers, silver-finished front and rear under-runs, black wheel arch mouldings and black rocker panels with silver inserts.

There’s a new machined/black contrast design for the 17-inch alloy wheels and TREK badging on the tailgate, plus rear privacy glass, a honeycomb-pattern grille and LED headlights.

The specification matches the regular Corolla Design grade, with the addition of a power tailgate with kick sensor. It also adopts the new Toyota multimedia system.

For 2020, the Corolla Excel grade has been enhanced with the standard provision of sports seats with black leather upholstery and red accents. The Excel Touring Sports further adds the convenience of a hands-free power tailgate that can be opened using a kick sensor below the rear bumper.

The Corolla Saloon matches its Hatchback and Touring Sports stablemates by introducing Apple CarPlay and Android Auto smartphone functions as standard on all versions.

The new-look Corolla range is available in Icon, Icon Tech, Design, Excel and GR Sport grade for the Hatchback and, with the addition of TREK trim, Touring Sports. The Corolla Saloon, powered by the 1.8-litre hybrid system, is offered in Icon, Icon Tech and Design specifications.

The new line-up is on sale and available for delivery now; GR Sport and TREK model deliveries will commence in January 2020.

Toyota has confirmed a plug-in hybrid version of the Rav4 SUV will be available in the second half of 2020.