"The 50% increase in power makes a world of difference to performance, with the C-HR now moving away from traffic lights with a zestiness previously missing." 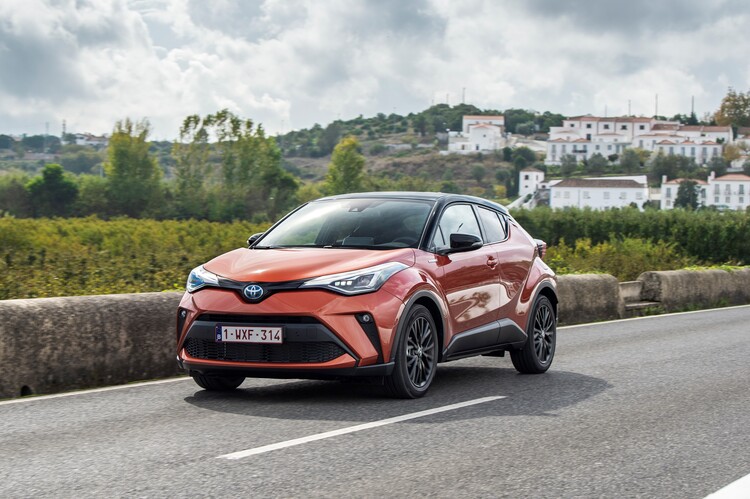 According to Toyota research, most C-HR drivers end up in the car thanks to its styling, so in facelifting the latest model, its Japanese designers haven’t spent too much time changing what’s clearly a winning formula.

The front has some new LED headlights and a modified bumper, while the rear now sports a black bar that connects the light clusters that looks a little like a spoiler and accentuates the width of the car. And that’s about it.

Significant changes to the cabin are also noticeable by their absence, although it is now clad in more expensive feeling materials that are softer to the touch than previously.

The infotainment touchscreen still juts out of the top of the dashboard, but now there are columns of physical buttons on each side of it to quickly access the relevant areas of the system. The system itself has been updated, but it still lags behind the best in class by some margin; it’s now bearable rather than frustrating. 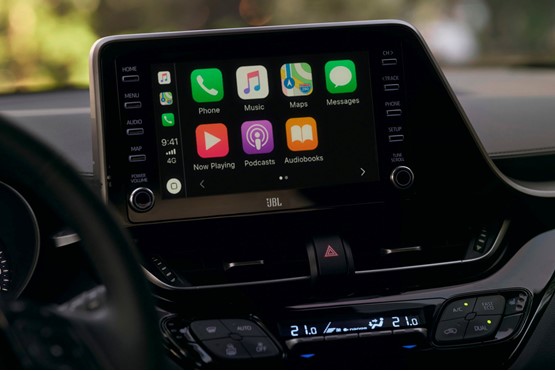 Happily, Android Auto and Apple CarPlay have finally been added to the specification list, meaning you can ignore Toyota’s system entirely and mirror your smartphone to the screen. There’s only one USB socket in the entire car though, so two occupants will not be able to charge a device at the same time.

What’s not changed at all is the rather compact cabin. The front is fine, if not quite as capacious as you might like, but the rear is tight and, thanks to that stylish C-pillar and a rising waistline that leaves tiny windows, very dark.

The boot will take 377-litres of whatever you might want to put in, which is fine for a hatchback (it’s just three litres smaller than that in a Volkswagen Golf) but a little small for a crossover. The paucity of storage continues in the cabin, where there’s a limited number of places for a phone, keys or wallet.

Not much has changed then, apart from one significant item – the 1.2-litre petrol engine has been dropped, along with the all-wheel drive option, and there’s now a range-topping 2.0-litre petrol hybrid.

The existing 1.8-litre hybrid remains, still producing 120PS and emitting just 86g/km of CO2. The new, larger option is lifted straight from the Corolla and Camry, and delivers a healthier 182PS, while emissions rise modestly to 92g/km.

The 50% increase in power makes a world of difference to performance, with the C-HR now moving away from traffic lights with a zestiness previously missing. The CVT gearbox lets the engine revs rise to hit the peak power point, where it stays while the throttle is pressed down; the effect is a continuous drone from the engine, but a surprisingly sprightly turn of pace. It’s quicker than it feels, as the lack of gear changes means there’s no occasional kick in the back, but 0-62mph in 8.2 seconds confirms its credentials.

The C-HR has always been a fine car to drive, being just stiff enough to avoid rolling around in corners, but soft enough to smooth over all but the worst road surfaces. The turn into a corner is sharp, the steering is consistent and the car is neutrally balanced. 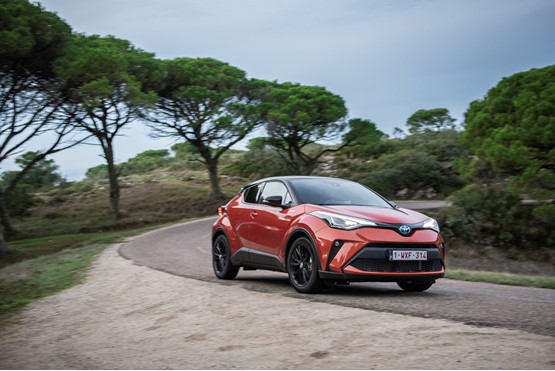 The extra performance hits economy a little, with the official WLTP figure of 49.6mpg being a little short of the 54.3mpg promised by the 1.8 option. However, the hybrid system allows you to achieve those figures without much effort, as the small electric motor and battery pack take up a surprising amount of the work.

A lengthy drive across country roads, motorways and urban areas resulted in a figure of 48.2mpg, which is little more than a rounding error away from the official figures, while the onboard computer showed that 58% of the time behind the wheel had been spent with the engine switched off.

Motorway runs will see that proportion reduced, while urban drivers will see the most benefit, but the bottom line is that the system works. The low CO2 figures and petrol engine keep it in the 22% bracket for benefit-in-kind, keeping tax bills in check for drivers, while depreciation is low enough to cover the rather robust list price.

The Škoda Karoq is by far the more practical choice, but can’t hold a candle to the style of the C-HR. If you can ignore the C-HR’s shortcomings, or can live without the practicality or flexibility offered by its more conventional rivals, then the Toyota has always made sense. The updates have improved matters further, with the added punch being a welcome addition.