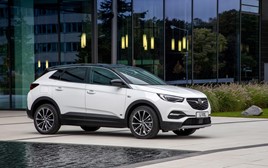 Vauxhall has confirmed a cheaper, front-wheel-drive, version of the Grandland X plug-in hybrid will be available next year.

A key model for fleet customers, it will join the previously-announced Hybrid4 version, which has all-wheel-drive, expanding the brand’s electrified vehicle offering.

It is powered by a 1.6-litre turbocharged petrol engine, combined with an electric motor and 13.2kWh battery.

The powertrain is shared with the Peugeot 3008 Hybrid, which promises 'less than 49g/km' of CO2 under WLTP.

Fuel consumption is rated at 192mpg (preliminary) and the car is expected to cover around 34 miles using just battery power.

The Grandland X Hybrid could fall into the 10% Benefit-in-kind (BIK) band in April, if it achieves a sub-50g/km CO2 level under WLTP.

It features a 3.7kW on-board charger as standard or an optional 7.4kW version, offering a charging time of two hours. The plug socket is positioned on the opposite side of the vehicle to the fuel filler.

In order to maximise space in the interior and the boot, the battery is installed under the rear seats.

Vauxhall has started accepting orders for the new Insignia, which features a refreshed design and improved driver assistance technology.