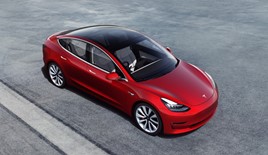 Newly published Vehicle Licensing Statistics have revealed that the number of electric cars has more than tripled in Q3 compared to the same period in 2018, increasing by 234%

According to the Department for Transport’s quarterly statistics, 22,596 ULEVs were registered in Great Britain between July and September - an increase of 39% on 2018 Q3 and 56% on 2017 Q3.

The number of diesel cars registered for the first time declined by 16% in Q3 compared to previous year, to the lowest number since 2001.

There have now been three successive years of double digit percentage point declines for diesel cars, which has seen the share of new diesel car registrations falling to 25% in 2019 Q3 from 47% in 2016 Q3.

There was a 27% increase in the number of alternative fuel cars over the same period.

Transport Secretary Grant Shapps said: "With the number of battery electric cars tripling and diesel cars at their lowest number in almost two decades, it’s clear that the journey to the road to zero has begun. However, I know there's a long way to travel yet.

“That is why we are investing over £1.5bn to charge up this electric car revolution, I will continue our drive to make clean cars the new normal.”

The number of EVs is expected to continue growing, boosted by the new zero percent benefit-in-kind tax rate for zero-emission vehicles driving demand from fleets.

For the year ending September 2019, the most common generic model of ULEV registered for the first time in the UK was the Mitsubishi Outlander with 7,959 vehicles, followed by the BMW 5 Series with 6,096 vehicles and the Tesla Model 3 with 5,527 vehicles.