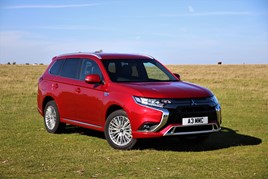 The Mitsubishi Outlander PHEV is the best-selling plug-in hybrid SUV and the UK’s second favourite plug-in hybrid model overall, according to the latest registration figures.

More than 2,600 Outlander PHEVs have been registered since the start of the year, contributing a total of almost 52,000 on the road.

There are twice as many Outlander PHEVs on UK roads than any other plug-in hybrid model, according to Mitsubishi.

David Rodriguez, sales and marketing sirector at Mitsubishi Motors in the UK, said: “The enduring popularity of the Mitsubishi Outlander PHEV isn’t just down to its technology, reliability and driving refinement, the outstanding service and support provided by our dealer network has been key to its success since day one.

“2020 has been a challenging year for everyone, our customers, our dealers and everyone here at Colt Car Company, but we’re back firing on all cylinders now and working towards creating a positive outcome for the rest of the year and beyond.”

The Outlander PHEV has proved popular with company car drivers, because of the low benefit-in-kind (BIK) tax it attracts, and the commercial variant with fleet operators keen to drive down emissions.

Mitsubishi recently announced it is withdrawing from the UK and Europe, confirming it will not bring any new models to the continent.

Stocks of existing models will continue to be sold until they no longer meet emissions regulations, while aftersales support will be provided by existing dealers and the Colt Car Company, which imports Mitsubishi vehicles to the UK.

You can read more about Mitsubishi's exit from the UK market and the implications for the fleet industry in the August edition of Fleet News, which will be available in digital format next week.

Mitsubishi: is this just the start of auto industry disruptions?

Mitsubishi’s announcement that it is exiting the UK and Europe could be just the start of major disruptions within the car industry in the wake of the Coronvirus pandemic.