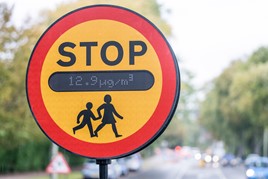 Renault has demonstrated the dangers of unnecessary idling outside schools with a new school crossing lollipop that measures air quality.

The custom lollipop is part of the brand’s “be mindful, don’t idle” campaign that launched in September.

One side of the Renault lollipop displays the exact concentration of fine particulates – known as PM2.5 – in the atmosphere thanks to in-built air sensor technology.

The reverse features simple iconography that shows whether it is ‘Good’, ‘Okay’ or ‘Poor’ allowing both parents and children to see the quality of the air they are breathing in real time as they enter the school gates.

“The lollipop has been the symbol of road safety for decades. Today, safety is not just about how to cross a road, it is also about how safe the air is that our children breathe going in and out of schools on a daily basis,” explains Matt Shirley, senior manager – Electrification & New Mobility at Renault UK. “The adoption of electric vehicles is a journey, but in the meantime, it’s important that we all do our bit and don’t leave our engines running unnecessarily.”

The World Health Organisation recommends that the air we breathe should not exceed 10μg/m3 of fine particulate matter, but the legal limit in the UK is double that figure.

An idling engine contributes the equivalent of 150 party balloons-worth of emissions unnecessarily into the atmosphere every minute. Renault found idling is more common in urban areas – with 50.1% admitting to doing it - compared to 12% in rural locations. More than 28% of people said they leave their engines running for 6-10 minutes.

According to research by the British Lung Foundation and Asthma UK, in excess of 8,500 schools, nurseries and colleges in England, Scotland and Wales are located in areas with dangerously high levels of pollution.

More than 8,500 schools, nurseries and colleges in England, Scotland and Wales are located in areas with dangerously high levels of pollution.

Renault studied the habits and attitudes of more than 4,000 ‘school run’ parents and motorists. Of the reasons given for leaving their engines running nearly a third cited doing so because they are only stationary for ‘a short while’ and 26% wanted to keep the heater or air-con on.

Almost two-thirds (60%) of all drivers said they were unaware that it is illegal under Rule 123 of the Highways Code. Authorities can now issue £80 fixed penalties under Road Traffic Regulations 2002 and Section 42 of the Road Traffic Act 1988 in Scotland.

Renault has launched ‘Be Mindful, Don’t Idle’ education campaign to improve air quality around schools after new research reveals the scale of the problem.