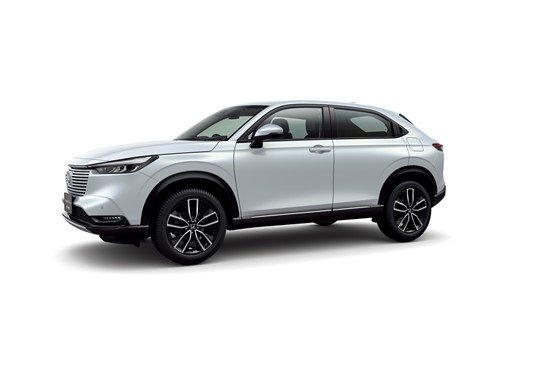 Honda has unveiled the all-new HR-V small SUV, which will be available towards the end of the year with a hybrid powertrain.

The new HR-V welcomes a bold new front-end design and a more boxy stance than the previous model.

It follows the recently launched Jazz and existing CR-V by utilising the brand’s e:HEV hybrid system, in place of conventional petrol and diesel engines.

It comprises two electric motors connected to a 1.5-litre petrol engine, with peak power output of 131PS and 253Nm.

The e:HEV pulls off in electric mode, changing to hybrid mode when the engine is under high-torque demand, with the petrol engine used when driving at higher, more constant speeds.

A new dashboard provides a less cluttered cabin than before, with a centrally mounted touchscreen providing infotainment services.

There is a unique ‘Air Diffusion System’ that directs a stream of air along the front side windows to the roof, creating a vortex of air beside and above occupants. Honda says the system addresses the discomfort issue of having air blowing directly at passengers.

The new HR-V also retains its ‘Magic Seats’ feature, which enables the rear bench to folded up, or the entire rear seat to be folded flat, to make more space for cargo.

Honda says the new model embodies its “seamless, clean, modern design philosophy seen in other recent new Honda models” and it “follows the key concepts of function and beauty.”

More details about the new HR-V are expected to be released in the Summer before the new model arrives in the UK before the end of the year.

Honda UK has announced Michael Doyle will take over as head of network and commercial development with immediate effect.

Honda has dropped the non-hybrid powertrain option from its CR-V and has revised the model for 2021.