"While the Jazz does have slightly less space than last time, it still has a large boot and flexible cargo area thanks to it retaining the trademark Magic Seats" 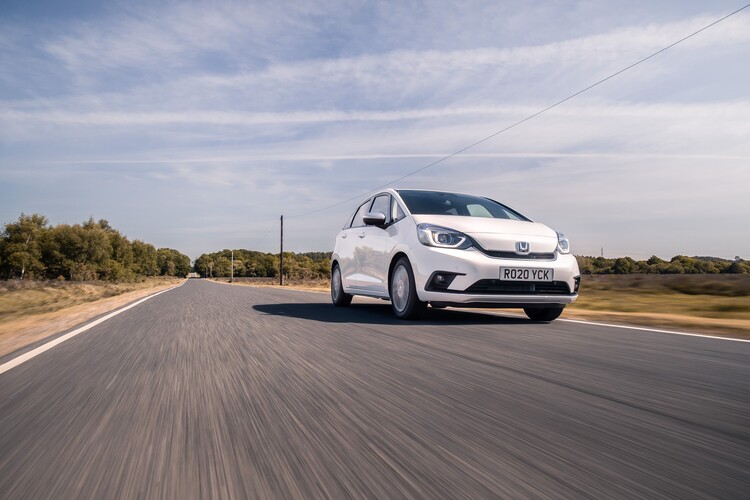 It might not be everyone’s cup of tea, but the Honda Jazz is peerless when it comes to practicality and ease of use. The niche model sits alongside the likes of the Ford Fiesta and VW Polo, but offers MPV-like versatility.

To gain a wider appeal, the new Jazz has been redesigned and offers improved connectivity, a more contemporary-looking interior and even lower running costs than before – thanks to clever hybrid power.

While the Jazz does have slightly less space than last time, it still has a large boot and flexible cargo area thanks to it retaining the trademark Magic Seats – these fold completely flat and have bases that flip to reveal a big, square area for taller items.

Meanwhile those in the back have nearly a metre of legroom, an impressive figure backed up by a more comfortable design and additional padding.

The old Jazz was a little dated inside, but this new car borrows much from the Honda e – the thin, two-spoke steering wheel and strong horizontal dashboard, in particular. 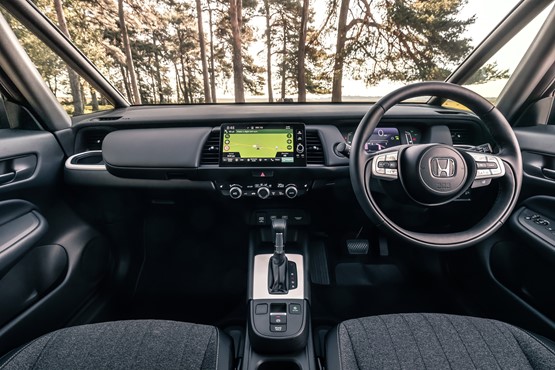 One of the first things you notice in this Jazz is the superb view out the front – visibility was always a strong point in this car and it’s stepped up a notch thanks to a redesigned dashboard and a-pillar arrangement.

Best of all though is the vastly improved nine-inch infotainment screen, with a much clearer menu and physical controls for functions like the stereo volume.

Connectivity has also been given a huge boost with the inclusion of Android Auto and wireless Apple CarPlay, plus an optional WiFi hotspot to keep passengers entertained on the move.

It uses a 1.5-litre petrol engine, two electric motors and a lithium ion battery to produce 109PS and 253Nm of torque.

The second figure is higher than any previous Jazz and gives the car a suitably muscular feel, especially when pulling away from standstill –this generation car completes the 0-62mph sprint in 9.4 seconds.

It can return a combined 62.8mpg and 102g/km of CO2, although those figures relate to the bottom two trims. Pick a top spec car and that dips to 61.4mpg and 104g/km of CO2, owing to its larger wheels. The Crosstar is slightly worse again.

Honda expects the mid-range SR trim to be the most popular model with fleet customers. It’s priced at £19,985 – around £1,200 more than an equivalent VW Polo.

Its low emissions mean the Jazz falls into the 23% benefit-in-kind (BIK) bracket, costing a driver around £76 per month in tax. A Polo driver, meanwhile, will have to stump up an extra £17 per month and almost 3p per mile in additional fuel costs.

The previous Jazz hybrid (like many hybrids) used a CVT. This time around there’s no gearbox at all. That’s because the engine’s main job is to generate battery charge for the electric motors. So, in town at sedate speeds, the Jazz runs in silent EV mode – and only when the battery level drops or more power is required does the engine quietly hum away in the background, topping up the charge.

On faster roads, a clutch connecting the engine and wheels can close, allowing the petrol engine to deliver direct drive with power boosted from the battery. At this point, the engine speed rises and falls through simulated gears to make it sound and feel more like a conventional car.

In truth this is still a little odd, but it’s much less odd than the old car, which would hold the engine at constant high revs while the speed of the car increased, so that’s a win in our book. 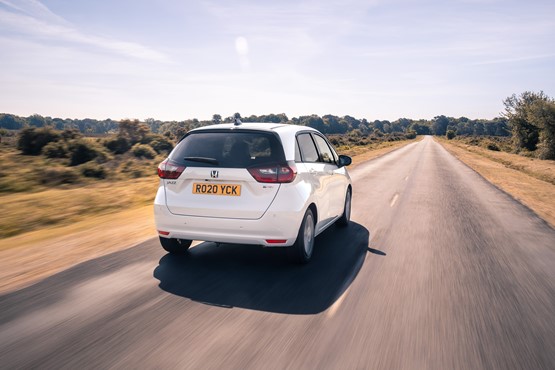 Unsurprisingly, the Jazz is at its most comfortable in town when wafting around quietly in EV mode – but measures have been taken to improve things at all speeds.

More sound insulation has been installed in the cabin and floor, plus around the doors, with the aim of reducing the wind and engine noise on the move. Those stubby door mirrors and redesigned a-pillars also contribute to a more hushed environment.

The steering weight is very light – almost alarmingly so at first – but it does mean super easy manoeuvring in town.

If you look under the skin of this car you’ll find newly designed front suspension with reduced friction for less vibration, and softened rear springs for greater passenger comfort.

The Jazz is actually quite a fun car to drive as a result – not quite in the same league as a Ford Fiesta, but eager enough with little bodyroll and good levels of grip. The brakes are strong and there’s also the inclusion of a ‘B’ mode, which slows the car down when you take your foot off the throttle, like in a conventional car.