"Even when parked, the Yaris is remarkably more exciting than before." 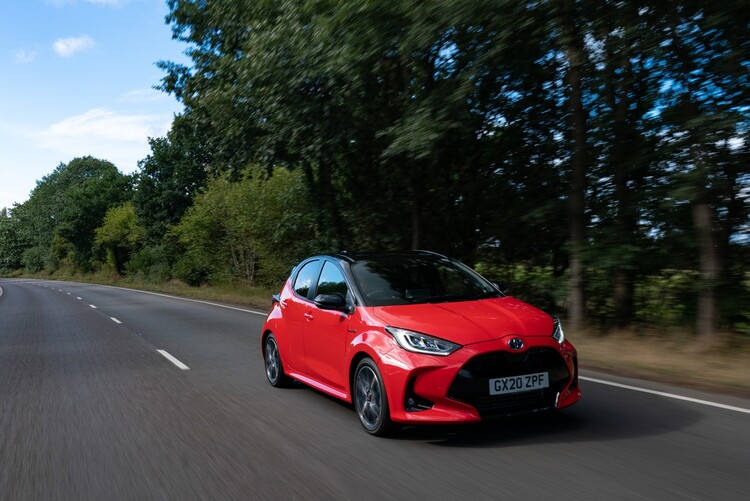 The previous-generation Toyota Yaris was somewhat revolutionary for bringing a full hybrid powertrain to the segment but, in all other respects, it was more than a little lucklustre.

When the all-new fourth generation model arrived for testing earlier this month, however, we were pleasantly surprised.

Even when parked, the Yaris is remarkably more exciting than before. The two-tone paint, flared wheel arches and deep bumpers make it look positively sporty.

The reason for this is perfectly simple: Toyota wants younger people to take more notice of it.

There’s not much that the new car shares with its predecessor. Under the skin, it’s based on an all-new platform that is related to the one that underpins the new Corolla (highly commended in the Fleet News Awards 2020), while under the bonnet is an all-new hybrid engine.

It’s packing a 1.5-litre three-cylinder unit, with two electric motors. One provides power to the wheels, while the other is used to regenerate power and start the petrol engine.

Toyota is confident the new engine ticks everyone’s boxes, so it’s the only powertrain on offer. It generates 116PS and 120Nm, channelled via a CVT.

While there are plenty of critics of CVT, it kind of works for the majority of people who will end up with one of these.

Toyota has actually done a pretty decent job of controlling the box’s desire to redline the engine, and has reined in the revs during acceleration so that passers-by don’t think you’re some kind of hooligan when you’re just trying to ascend a modest incline.

Electric power is available for longer spells than before and at higher speeds. While the battery remains small, it’s easy to keep the engine off when driving around housing estates, car parks and other places where emissions need to be kept down.

Talking of emissions – the Yaris doesn’t have many. It emits from 92g/km, making it one of the few non-plug-in models to slip below the 100g/km mark under WLTP testing.

That new platform doesn’t just make space for the new powertrain, it also enables the car to be almost 40% stiffer, lower and wider. The upshot is the Yaris is much better to drive.

You could almost call it fun. Let’s not get too carried away, it’s no Fiesta. But the steering is sharp and makes the car feel nimble. There are good grip levels too: you can push the Yaris faster and harder into corners than ever before.

At motorway speeds it feels more stable and refined, happily cruising at 70mph while returning upwards of 50mpg.

The official figure of 68mpg is possible, although it requires a fair bit of urban driving where the car operates in EV mode more frequently.

Switching to a three-cylinder engine was a smart move. The unit, despite lacking a turbocharger, is free revving and feels much sweeter than the old four-cylinder unit.

It’s a bit coarse when cold, but you soon get used to the thrummy engine note and it isn’t too intrusive.

We completed a number of journeys during our time with the car and it never managed less than 50mpg.

Inside, the cabin is a tad gloomy. This is mainly due to excessive use of grey plastics. Build quality is robust, however.

The eight-inch infotainment screen (entry-level models get a seven-incher) dominates the dashboard, jutting out so it falls to hand while on the move.

Apple CarPlay and Android Auto come as standard and are required for sat-nav as there’s no built-in option. The rest of the system is pretty basic but has DAB and Bluetooth, which should be enough to keep most drivers happy.

The instruments use three digital displays. A centre colour screen contains the trip computer, while two circular displays provide the speed, fuel, temperature and selected gear. It’s a slick set-up and is easy to understand.

Interior space is moderate – other cars in the segment, such as the new Renault Clio, feel more spacious.

The Yaris also falls short on boot space, with a meagre 281 litres versus the Clio’s 380.

You also get aircon and a reversing camera on the base model.

We’d recommend the £20,790 Design grade. It comes with the aforementioned digital dial setup and LED headlights.

The £21,790 Dynamic comes with faux-leather seats, keyless entry and a JBL sound system, but rides on larger 17-inch alloy wheels which spoil the ride a tad.

Range-topping Excel is £22,040 and gets electric folding door mirrors and blind spot monitoring.