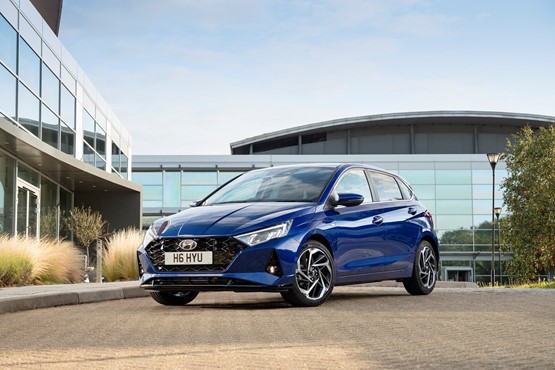 The new Hyundai i20 sets itself apart from its predecessor with bold styling and new technology – two things that are, seemingly, what every new car does to separate itself from older versions. The Hyundai needed them.

The previous i20 was no oil painting and felt ‘old’ alongside more modern competitors.

A lower roofline and a wider body give the new car a sportier look, while also increasing passenger space. Boot space has grown too, to 352 litres – giving the car a 60-litre advantage over the segment’s best-selling Ford Fiesta.

Hyundai claims the new i20 is equipped with the ‘most comprehensive’ connectivity in the sector and has a ‘best in class’ safety package.

Inside, it’s a tech-fest. There’s a customisable 10.25-inch digital cluster instead of old school dials behind the steering wheel, and another 10.25-inch centre touchscreen for the infotainment system. Wireless Apple CarPlay/Android Auto is also available.

New for the i20 is a 1.0-litre mild-hybrid petrol engine. It’s the only engine available and has CO2 emissions from 115g/km with the promise of around 55mpg, when paired with Kia/Hyundai’s new six-speed iMT (intelligent Manual Transmission). It can cruise in neutral with the engine off to conserve fuel – with the driver not needing to do anything.

There’s also a seven-speed automatic that we’ve only driven in prototype form, so we’ll hold back our judgement until we’ve driven a finished version.

For everyday use, the i20 is more than fine. The first notable thing about the car’s handling is how light the steering is. This is perfect for tight roundabouts, multi-storey car parks and sitting in traffic. It excels at these tasks.

It’s not quite as fun to drive as a Fiesta, partially down to the steering that offers little in the way of feedback because of how light it is. But it’s more rewarding to drive than the old car.

Despite the steering not ‘speaking’ much to the driver, the i20 changes direction quickly and the car reacts to all the driver inputs swiftly.

Those after the latest technology will gravitate to the i20. Wireless Apple Car/Play/Android Auto and its suite of safety features are unusual in a car of this size  – while the amount of space in the rear seats is noteworthy too.

Drivers after plush, high-end materials are better served by the likes of the Volkswagen Polo. While if you’re after a diesel or a three-door, the i20 will also not be suitable.

The entry-level SE Connect spec car has a P11D price of £18,375 and will attract a monthly benefit-in-kind tax charge of £80. It’s not quite cheap enough to beat the Fiesta Trend mild hybrid, however, which has an extra 25PS and costs £100 less. The Ford also has lower running costs of 0.5p per mile.