Consumer Reports “trick” Tesla’s Autopilot to work with no driver 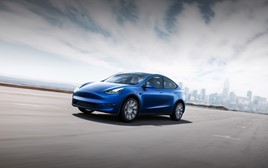 An American magazine has highlighted how Tesla’s Autopilot system can be “tricked” into operating while there is no one in the driver’s seat.

The experiment follows the death of two men in a Model S last week, which crashed while no one was in the driver’s seat. Tesla CEO Elon Musk claims the Autopilot system wasn’t activated at the time of the collision.

Consumer Reports demonstrated that the Model Y was able to make several trips up and down a test track, with no driver, automatically steering along painted lane lines. The system did not send out a warning or indicate in any way that the driver’s seat was empty during the experiment.

“In our evaluation, the system not only failed to make sure the driver was paying attention, but it also couldn’t tell if there was a driver there at all,” said Jake Fisher, CR’s senior director of auto testing, who conducted the experiment.

Tesla vehicles, like those from a number of manufacturers, determine whether a driver is present by examining steering wheel inputs. If there is weight on the wheel, even if the driver’s hands are elsewhere, the vehicle assumes a driver is driving and paying attention.

Devices that add weight to the steering wheel and “trick” the system have been openly available to purchase since 2018.

Consumer Reports questioned why Tesla doesn’t include monitoring of the seat occupancy sensor, that is already used for seat belt warnings and airbags, as part of the Autopilot system

The magazine also highlighted that companies like BMW and Ford use a camera to ensure the driver is looking at the road ahead.

Self-driving cars “10, 15 years away" from being reality, "maybe never”

Fully self-driving cars becoming a regular sight on UK roads could be “10 or 15” years away, “maybe never”, says the consortium leader of a major autonomous vehicle trial.