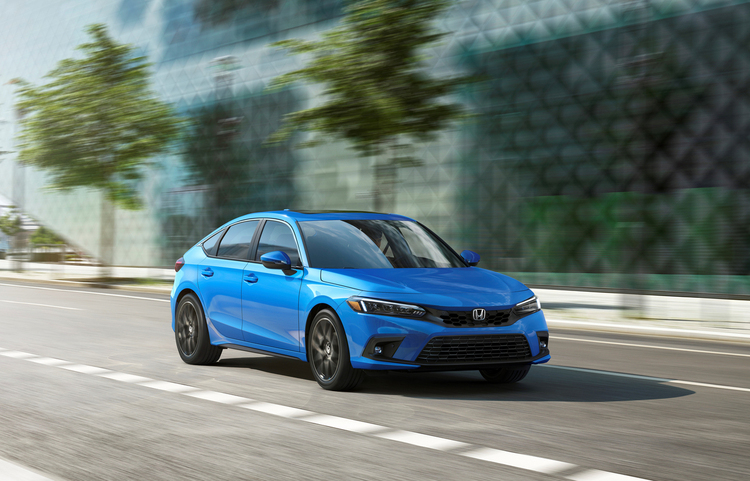 Honda has revealed the new eleventh-generation Civic hatchback, which will come to Europe in Autumn 2022.

The new model will be offered as standard with an e:HEV hybrid powertrain, in line with Honda’s electrification strategy for all its European mainstream models to feature electrified powertrains by the end of next year.

It is based on the North American variant, which is already on sale there as a saloon.

The e:HEV system pairs a petrol engine with two electric motors. The engine is primarily used to power the electric motors, but it can also be used to provide drive to the wheels in certain conditions.

It’s likely the new Civic will use a 1.5-litre petrol engine, as already seen in the HR-V and Jazz, rather than the larger 2.0-litre unit that is found in the CR-V. Power output is expected to be around 130PS, but no technical details have been revealed yet.

The new Civic ditches the integrated rear spoiler of the old model, instead featuring a sleeker tailgate.

At the front end the styling is, similarly, more conservative, giving the car a more refined appearance.

The wheelbase has grown by 35mm, providing more passenger space.

Inside, the car features a fully digital instrument cluster and a new infotainment system.

Honda will no longer build the Civic in the UK and production of the existing model is being wound down at its Swindon plant.

More details about the new Civic will be available closer to the cars arrival in the UK next year.

Honda has unveiled the all-new HR-V small SUV, which will be available towards the end of the year with a hybrid powertrain.

Consultation will be launched to decide the distance a new hybrid electric vehicle can travel on zero emissions to remain on sale from 2030 to 2035.