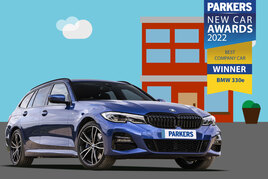 The BMW 330e has been named Best Company Car at the Parkers New Car Awards 2022, in partnership with Fleet News.

For the second year running, the plug-in hybrid compact executive has taken the trophy and is one of a total of 20 award winners revealed today (27 September) by Parkers.

Parkers editor Keith Adams said: “Plug-in hybrids used to be a compromise – they either didn’t go far enough on battery to be any use or are too heavy to be enjoyable as a driver’s car.

“That was before BMW came along with the 330e and tore up the rulebook. Here you can have your cake and eat it – vivid acceleration and excellent fuel economy. No wonder I see so many on my travels these days – this is a tax-efficient company car that’s too good to ignore.”

The 330e finishes ahead of the Toyota Rav-4 PHEV, which was named Plug-in Hybrid of the Year at the 2021 Fleet News Awards, and the Skoda Octavia iV.

The winning car has been tested rigorously by the Parkers.co.uk team and Fleet News, which judged the best company cars on a combination of value, quality, reliability, cost-per-month on finance deals and fitness-for-purpose.

More details about the Parkers New Car Awards can be found on the Parkers website www.parkers.co.uk/car-awards/.

BMW has a commitment to have 25 electrified vehicles by 2023, with 13 of those pure electric.

Providing BMW company car drivers with a customer experience more like that of a retail customer is a key priority for the manufacturer over the next 12 months.