"Materials are of a higher quality and there is more focus on the design of the interior, meaning it’s a nicer place to be and more comfortable." 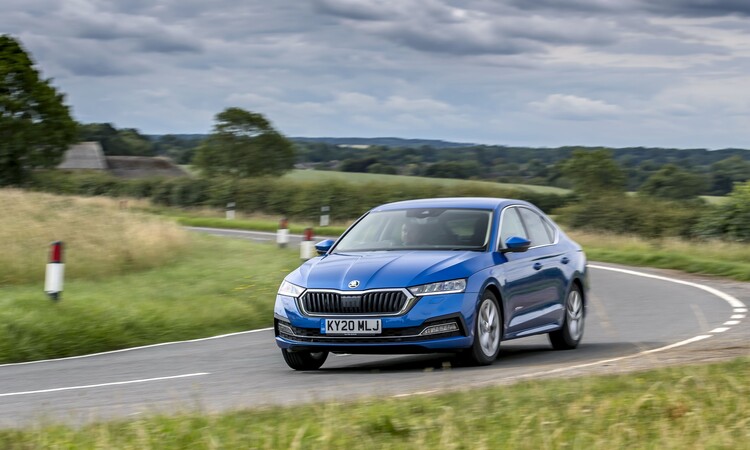 Skoda has established itself as the no-frills, sensible arm of the VW Group, making the previous Octavia ideal for fleets looking for safe, reliable and cost-effective transport. The Octavia has also proved popular as a rapid response vehicle with its 245PS VRS version.

The Octavia is based on the same platform as the new VW Golf and Seat Leon, which is an excellent start. It’s also the largest of the three, growing 19mm compared with the previous Octavia and offering the biggest boot in the segment with 600 litres.

There is an estate body too, which provides even more load space (640 litres to the parcel shelf) for those that need greater practicality.

Compared with its stablemates, the Octavia looks the most grown-up given its almost saloon-like appearance and restrained styling.

The addition of larger wheels, more luxurious interior trim options and a higher specification level across the range serves to lift the Octavia’s appeal and bring it closer to premium models.

Inside, there’s a renewed focus on infotainment with a 10-inch touchscreen at the centre of the dash. It’s used to control the key functions, such as climate control, audio and sat-nav. Skoda has also included a row of buttons to call up key features, which saves the driver messing around with the screen too much when driving. 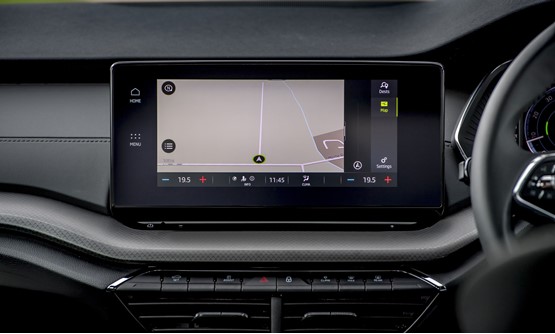 Materials are of a higher quality and there is more focus on the design of the interior, meaning it’s a nicer place to be and more comfortable.

Skoda has introduced a new two-spoke steering wheel for the Octavia. It features a pair of premium-feeling rotary controllers for the volume and trip computer settings and an array of not-so-premium-feeling buttons to control the various displays on the digital instrument cluster. The cruise control remains on a separate stalk, however.

Interior space and storage is impressive. There are smartphone pockets on the seat backs for rear passengers and a useful array of cubbies and cupholders in the front console.

DSG versions feel more spacious up front as they use a toggle switch to select gears, rather than a conventional lever in the centre console.

The latter offers a comfortable motorway ride, with good body control when required. However, the Octavia is noticeably less dynamic than the Leon and Golf. Over speed bumps and undulating surfaces the suspension feels too soft, leading to a ‘bouncing’ sensation. We’ve not yet tried an Octavia with standard suspensions, which most fleet models are likely to feature.

All the powertrains are frugal, with the diesel easily topping 60mpg on a sedate run and the 1.5 TSI achieving more than 50mpg. See our long-term test for more information on the 1.5 TSI.

The Octavia iV develops 204PS, while the vRS iV serves up 245PS and 400Nm. That’s right, there’s a sporty version!

CO2 emissions range from 22-36g/km and the zero-emission capability is up to 43 miles (39 miles for the vRS iV). That means the ‘regular’ Octavia iV sits in the 7% benefit-in-kind bracket. Both are strong performers when compared with the rest of the Octavia’s powertrain line-up, giving punchy acceleration and equally impressive efficiency.

We saw no less than 45mpg during our tests and expect upwards of 60mpg would be easily achievable with a light foot. The vRS feels much more involving to drive, with firmer suspension, sports seats and heavier steering. Its power boost is also noticeable, although the effect on economy is minimal.

Don’t expect a driving experience equal to the petrol vRS, however. The car’s battery pack adds noticeable bulk and its six-speed automatic doesn’t dispatch power as readily as a performance version requires. Nonetheless, as a company car, the iV makes sense. 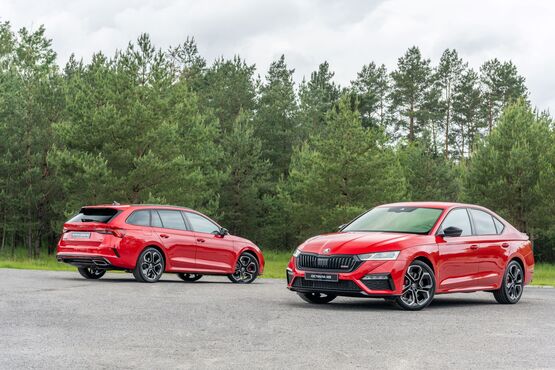 Among the line-up is a fleet-focused SE Technology model, which comes with LED headlights, front and rear parking sensors, sat-nav and a built-in e-SIM for connected services.

A number of new safety systems debut on the Octavia, including Collision Avoidance Assistance, which can perform a “controlled evasive manoeuvre” if it thinks you’re going to collide with a pedestrian or cyclist.

There’s also an Exit Warning system that lets the occupants know if another vehicle or a cyclist is approaching from behind when a car door is open.

Of course, the Octavia wouldn’t be a true Skoda if it didn’t have some ‘simply clever’ features and on this new model there are plenty of them. In the driver’s door you’ll find an umbrella, along with an ice scraper mounted in the fuel filler flap.

New features for the Octavia include a funnel integrated into the lid of the windscreen washer tank and water channels on the windscreen, which allows rainwater to drain optimally, contributing to lower drag.

The new Octavia isn’t the best looking or most exciting car from the VW Group stable, but it is excellent value for money, endlessly practical and easy to both live with and drive. These should do it big favours in the fleet market.