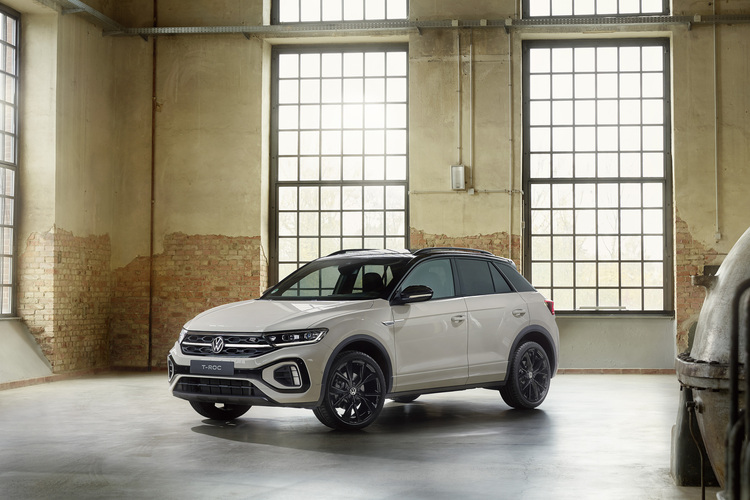 Volkswagen has revealed a facelifted version of its T-Roc SUV and cabriolet, featuring an upgraded interior, refreshed styling and enhanced technology.

The new T-Roc, which will be available in the Spring, features a re-designed dashboard with higher-quality materials and a new infotainment screen.

All versions are now equipped with a digital instrument cluster as standard, while the new tablet-style infotainment screen comes in 8.0- or 9.2-inch sizes.

Externally, the T-Roc has been given a sharper look and now comes with LED headlights across the range. VW’s IQ matrix lights are also available as an option, featuring an illuminated radiator grille strip.

There are three TSI and two TDI engines carried over from the outgoing model. The 1.0-litre TSI three-cylinder engine has a maximum output of 110PS. The four-cylinder offerings deliver 150PS as a 1.5-litre and 190PS as a 2.0-litre.

Two 2.0-litre TDI engines provide a choice of 115PS and 150PS outputs. The two most powerful units can be paired with all-wheel-drive.

Only the 1.0 TSI and 1.5 TSI are offered on the cabriolet version.

Full pricing and specification will be announced shortly.

We once tagged the T-Roc SUV as ‘boring’, but the T-Roc convertible is quite the opposite.

Volkswagen has revealed the ID5 SUV Coupe which will join its electric vehicle (EV) line-up early next year.

Volkswagen has revealed pricing and specification details for the facelifted version of its sixth-generation Polo supermini.