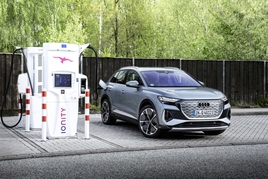 Audi has boosted the charging capacity of Q4 e-tron models equipped with an 82kWh battery pack to 135kWh and introduced a new 11.6-inch infotainment screen across the line-up.

These new vehicle improvements rely on optimized software for the battery’s thermal management and control systems.

Read about our experience with the Audi Q4 e-tron in our long-term test report.

A new MMI touch display, featuring an 11.6-inch screen with a resolution of 1,764 x 824 pixels, now comes standard across the Q4 line-up.

The integration of Amazon’s virtual assistant Alexa, lets drivers manage their calendar or shopping list by voice as well as control compatible smart home devices from their car. Individual user profiles in the car, last-mile navigation options, and expanded app functions on the car status and parked position round out the connect portfolio.

The myAudi app also offers new features, such as preplanned routes that can now be conveniently sent to the car right from the app. The e-tron route planner can also automatically plan charging stops based on the current traffic situation, taking into account the driver’s individual consumption profile. The app now also allows users to set a charging target, and the driver is notified via a push notification on their smartphone when the desired charge level is reached.

“Since its introduction to the UK market nine months ago, the Q4 e-tron family has been a runaway success and helped accelerate our electrification plans,” said director of Audi UK Andrew Doyle. “Customer feedback has been incredible and in the pursuit to deliver the best possible product we’re introducing a significant technology and software upgrade to new Q4 e-trons that will cement the model's position at the top of the compact EV segment."

A leisure trip to Ireland highlights how easy the Q4 e-tron is to live with.

The BMW iX3 and Hyundai Ioniq 5 electric were the second and third most popular vehicles ordered at Tusker.