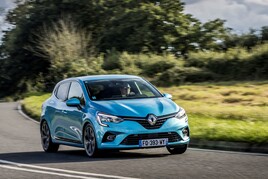 Renault has applied changes to the Clio and Captur ranges, for the 2022 model year, to improve the driving experience, convenience, and practicality.

The Clio range now consists of the Evolution, Techno and RS Line trims.

The Evolution replaces the previous Iconic Edition, boosting its predecessor’s specification with the notable addition of a larger seven-inch TFT Colour Instrument Display.

Techno builds on the previous SE Edition, with the edition of dark tinted rear windows, chrome detailing on the window surrounds and door panels, and a shark fin antenna. Inside, the interior is refreshed with grey accents to the dashboard and door panels, as well as dark grey pinstriped seat upholstery.

The RS Line is now equipped with a 10-inch digital instrument cluster, alongside the 9.3-inch infotainment system with satellite navigation and wireless phone charger.

All versions now come with two luggage nets fitted in the boot.

The Clio also sees the introduction of the E-Tech 145 engine on hybrid versions, which enhances performance and drivability. The new 1.6-litre petrol hybrid engine produces 145PS – an increase of 5PS on the outgoing version – and emits as little as 96g/km of CO2.

The Evolution is an upgrade to the outgoing Iconic Edition and now features 17-inch Ediris diamond cut alloy wheels, as seen on the Captur Rive Gauche Limited Edition. It is also equipped with automatic air conditioning as standard.

The Techno replaces the SE Edition, debuting with an enhanced exterior with shark fin antenna, while the RS Line continues to offer the same levels of equipment as the previous top-of-the-range model with an added 10-inch instrument display.

Renault, Nissan and Mitsubishi to launch 35 new EVs by 2030

Renault, Nissan and Mitsubishi Motors are to launch 35 new EV models by 2030 as part of their future roadmap.