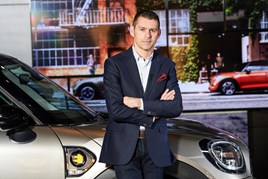 David George has been welcomed as the new director of Mini UK, as predecessor Chris Brownridge accepts a new role at BMW UK.

George (pictured) started his new role as director of Mini on January 25 and succeeds Brownridge who has moved to the role of sales director at BMW.

Previously a sales director at Mercedes-Benz, George has worked across sales, marketing and aftersales since his career began at VW Group in 2000.

George said: “I first fell in love with the brand at the age of 21 when a friend and I travelled across Europe in a Clubman which we had restored. I have long since admired the Mini range after the launch of the Mini Hatch in 2001.

“With new Mini Hatch and Mini Convertible models launching in March and the first fully-electric production Mini set to be revealed next year, the future looks incredibly exciting.

“I’m really looking forward to working with the Mini team to further enhance the brand’s appeal amongst both current and new customers alike.”

Future BMW and Mini models to use i3 traction control technology

Future BMW and Mini models will use the traction control technology currently used in its i3 which offers 50 times faster responses for greater traction and driving stability.

EVision Electric Car Hire, based in Strood Kent, has taken delivery of 50 new BMW i3s increasing its EV fleet to 110.