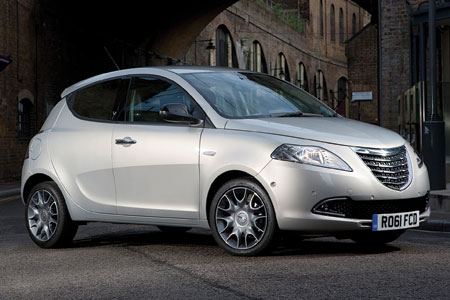 US car brand famous for high-output V8 engines is set to be a star eco performer in the UK – thanks to a little help from Italy.

The move has been enabled by using Lancia models and rebadging them. Lancia was set to be reintroduced in Britain a few years ago, but Fiat’s stake in Chrysler prompted a change of strategy.

Driven by turbocharged petrol and diesel motors developed by Fiat, the upmarket B-sector cars achieve sub-100g/km CO2 figures and are poised for a significant turnaround in the firm’s British business activities.

“We’ve had some dark days here over the last three years as a result of failing to compete in terms of engine size, emissions and economy,” said Jeep Chrysler brand director Nigel Land.

“But this car should provide a solid foundation for our business and bringing it here proves we have full focus on the right-hand drive market.

“Our aim is to compete fiercely with the likes of the Ford Fiesta and Renault Clio in the heartland of the sector and our targets are realistic, given that we don’t want to enter fast-churn channels.”
Land’s plan is for up to 4,500 examples of the car – a slightly modified version of the Lancia Ypsilon – to go on British roads next year.

“These are highly distinctive and competitive cars and they’re backed by strong residual values.

“We’re entering the segment with a credible alternative to the mainstream with a car that combines five-door practicality with three-door looks – and we intend to be at the forefront of eco motoring,” he said.

The car comes in nine versions with S, SE and Limited trim levels. Three are powered by a four cylinder petrol engine and two by a diesel offering 74.3mpg and 99g/km. The remaining four use the acclaimed TwinAir unit, which blends 67.3mpg with 99g/km and 97g/km in auto form. All have stop-start.

Just as in the Fiat 500, the two-cylinder motor is a spirited performer that thrives on revs and has an output that belies its capacity.

Designed to promote the feel of a larger car, the Ypsilon’s interior gains space by being taller than usual. Though shorter than average, the body provides adequate room for rear seat occupants with luggage capacity of 245 litres.