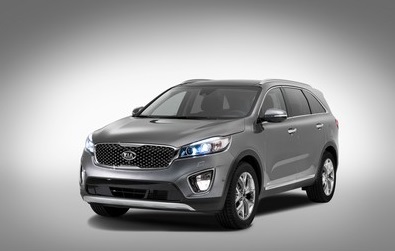 The new Sorento will continue Kia’s policy of raising prices for next-generation models when it goes on sale in April.

Although P11D rates have yet to be released, a 5% increase is tipped for the full-size SUV, taking starting prices to around £27,000. Residual values are also predicted to rise.

Kia believes that the best-selling model for company car drivers – most of whom will be user-choosers – will be the top-spec KX4 automatic, costing around £40,000.

Buyers of large 4x4s have warmed to the previous Sorento, appreciating its spaciousness, value for money and seven-year warranty. With this latest model, Kia is attempting to add desirability to the proposition, too.

It is larger, better-equipped and more expensive than before, while there is no escaping the bolder interpretation of Kia’s design language. The front end is dominated by a more upright version of the  ‘tiger nose’ grille, with an inset comprising three-dimensional diamond-shapes.

Elsewhere, the Sorento’s styling is evolutionary and enlarged, particularly at the rear where the 95mm longer bodywork liberates interior space, making the standard third row of seats habitable by more than just children.

The middle row of seats tip and slide forward, making access to the third row much easier. UK buyers won’t be offered the five-seater version.

While the extra roominess is welcome, the most obvious interior improvement is the plastic used on the dashboard and door panels, many of which are soft-touch items.

Complementing these quality enhancements, says Kia, are ongoing moves to elevate the standard of service across its growing retail network.

The company is looking to reflect a changing buyer profile. It plans to do this by offering a higher degree of service – the kind of customer satisfaction that Audi and BMW customers typically expect in a dealership.

The Sorento will be offered with one choice of engine: the 2.2-litre 197hp diesel.

Kia expects most company car drivers to opt for the latter, which is generally refined and smooth. However, there are occasions when more urgency is demanded. It is during these moments that there’s a slight hesitation while the auto decides whether dropping one gear, rather than the two ratios selected, is sufficient.

Although the new Sorento isn’t the kind of car that will deliver an exhilarating drive, it is significantly more accomplished than the outgoing model, displaying better body control.

There’s still a degree of roll as you corner with vigour, but nothing excessive, allowing you to quickly develop confidence in the car’s handling traits.

Four-wheel drive is standard, while trim levels will be familiar to existing Sorento customers, with an entry-level KX1, rising through KX2 and KX3, to the company-car-driver-friendly KX4.

Equipment levels will be revealed as the Sorento’s UK launch draws near, but most of the following features are likely to be part of the KX4: colour touchscreen, with improved sat-nav graphics; reversing camera and Around View Monitor, for a bird’s eye view; DAB radio; Bluetooth; parking sensors with Rear Cross Alert which warns of vehicles approaching from the sides when reversing out of spaces; and Smart Parking Assist self-park.

Blind Spot Detection supplements the large door mirrors, while adaptive Advanced Smart Cruise Control, which accelerates and brakes the Sorento to maintain traffic flow, is one of the most effective systems we’ve experienced.