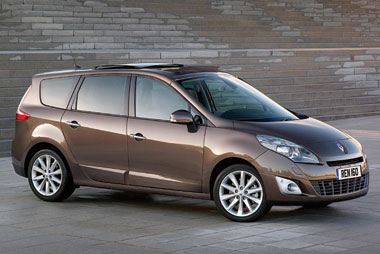 Is renault scenic an automatic for the people?

One of the newest elements of our Renault Grand Scenic long-termer is its automated manual gearbox.

The idea behind the technology is to make driving simple, even though behind the scenes it’s a very complex piece of kit.

The EDC dual-clutch six-speed automatic transmission is effectively a manual gearbox without the clutch pedal. So you get the familiar P-R-N-D automatic, but you don’t get the downside of higher fuel consumption that often plagues traditional automatics, leading to higher tax and fuel bills.

In automatic mode, the Scenic’s computer selects the ideal gear at any time. It has two clutches too, which allows it to pre-select the next gear based on what you are doing and then change faster than you could do manually.

The system also incorporates a hill-start assist function. When starting on a hill, the brakes stay on for a few seconds after you take your foot off the brake pedal until you move forward. Together with an automatic-style ‘creep’ function, this prevents the risk of the vehicle slipping backwards.

Gear changes are smooth and well timed on the move and it’s pretty economical too. Despite some spirited town driving it’s still achieving 45mpg, although this is well below the official figure.

So, as a concept it’s brilliant and over many hundreds of miles it has proven an excellent feature, but it’s not without flaws.

On the move, the gearbox is generally difficult to fault, but it’s when the car is setting off from a standstill that Renault’s product development needs to move up a gear.

If you need power quickly, for example joining fast moving traffic from a T-junction or joining a busy roundabout where you need to take gaps as you see them, the gearbox struggles to keep up.

Floor the accelerator......and.......the…..car....thinks……for a few seconds……..beforeallthepowersuddenlyarrives. By which time, the moment has gone and you are left waiting for a bigger gap.

To get around this issue, you can be more gentle with the throttle, but you just try being sedate when leaving a T-junction onto the A605 at Elton during rush hour.

This is frustrating more than being a showstopper, so it doesn’t undermine the value of the gearbox.

I would recommend drivers at least give the EDC a try to see how they get on with it, as it should be an automatic that suits most people.