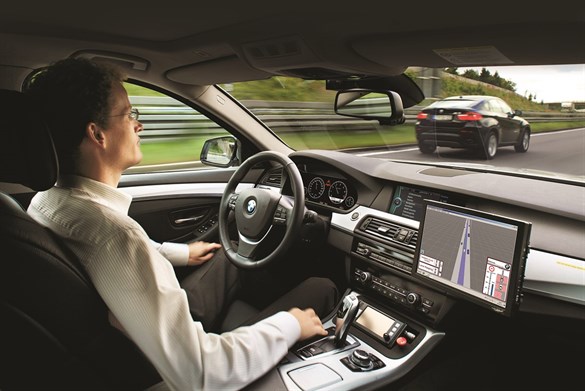 They've long been the stuff of science fiction, but driverless cars are now very much a reality. Volkswagen's 'Temporary Autopilot' Passat and Google's driverless car have been well documented, not least because the latter recently crashed, but BMW's autonomous vehicles have been less publicised.

The German firm has developed a pair of 5 Series saloons capable of driving independently on motorways. Legislation and the fact that they're still very much in the prototype stage requires a driver to be at the wheel at all times, though.

It works by using 12 sensors on the exterior of the car, which speak to a series of computers in the boot. In turn, they communicate the signals to an advanced GPS system and improved versions of BMW's existing lane marking detection and active cruise control systems. This allows the car to navigate other traffic and position itself on the road with near pinpoint accuracy.

The driver has to remain in full control of the car until it's cruising on a motorway and takes charge again when it's time to turn off onto another road. The system is activated by pushing what would normally be the volume button on the steering wheel a couple of times.

When the car takes over, the steering makes constant, small corrections and the car accelerates, brakes and changes lane independently. It's programmed to hug the inside lane whenever possible but it's also capable of overtaking slower vehicles and safely navigating other traffic. Inside, a dash-mounted monitor displays the view from cameras at the front and rear of the car, along with primitive looking but highly advanced blocky blue graphics that vary in size to represent other vehicles on the road.

BMW has been working on the driverless car project until 2005 and the first prototypes proved their worth on race circuits. Initially known as TrackTrainer, the cars had a perfect line programmed into them (previously set by an expert human racing driver), which guaranteed that a faultless lap every time.

As for the car's reliability, it's proved largely dependable so far, and it remained totally safe and effective during our brief test drive. If any component stops working, the sound system emits a loud, shrill buzz to alert the driver to take full control of the car immediately.

Impressive though it may be, the car can't yet deal with roadworks, nor is it ready for use on B-roads or in towns. What's more, there are no plans to put the autonomous 5 Series into production in any way. The point of the project is to hone and develop electronic driving aids and fine-tune the sensors for use in production cars.

BMW has already made inroads with new electronic driving assistance systems thanks in part to the autonomous car. Two forthcoming systems in particular have been credited to its input – congestion assist and emergency stop assist. The former enables the car to drive automatically at speeds of up to 40kph in heavy traffic, allowing the driver to relax during a jam.

Emergency stop assist is a more advanced system that monitors the driver's well being and can react in the event of something like a heart attack or a stroke at the wheel. It will first sound a warning, then if the driver fails to react, automatically pull the car onto the hard shoulder and contact the emergency services.

There's no word on how soon either of those systems will appear on production BMWs, but the company hinted that congestion assist was the closer of the two to completion, which suggests that it may be appear on something like the next 7 Series.