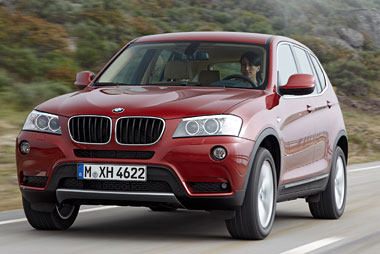 BMW’s X3 has grown to better fit between its larger X5 and smaller X1 siblings.

Parked alongside the original X5, the new X3 is virtually identical in size, though its emissions and economy are in another league.

BMW’s timing with Efficient-Dynamics couldn’t have been better, and as every model has been replaced or upgraded, the fuel and emissions saving technology has been introduced.

Featuring the same 2.0-litre turbodiesel engine delivering 184bhp and 280lb-ft of torque that appears in the 520d on long-term test at Fleet News, the X3 is able to reach 62mph in 8.5 seconds.

That’s four-tenths of a second quicker than its predecessor, though BMW has achieved the increased performance without environmental penalty.

The improved efficiency is largely due to automatic start-stop – available with both the standard six-speed manual or eight-speed automatic transmission – regenerative brakes, electric power steering and on-demand engine auxiliaries.

The result is that on the official combined consumption cycle, the X3 returns 50.4mpg with CO2 emissions of 149g/km (147g/km for the auto).

BMW is similarly aggressive with the pricing for the X3, with list prices for the X3 xDrive20d SE starting at £115 less than the outgoing car.

Optional equipment includes sector firsts like a head-up display, reversing camera with top-view, and a range of packages – though you have to pay £260 for Bluetooth hands-free with a USB audio connection.

Inside, the X3 feels significantly bigger than its predecessor. Leg and headroom in the rear is improved, as is shoulder room.

The boot grows in size too, now offering a class-leading 1,600 litres with the rear seats folded.

Fit and finish is significantly improved, and the X3 no longer features some of the low-rent plastics that blighted its predecessor.

As well as the classier, more spacious interior, the car drives with a far greater sophistication than before.

For that you can thank the engineers responsible for ride and handling.

There’s compliance in the suspension, with the X3 coping with bumps and lumps in the road very well indeed.

There’s still all the control you’d expect from a BMW – without the bone-jarring ride of its predecessor.

In every way it feels like a junior X5 now, the 2.0-litre engine helping here.

That powerful engine is quiet and smooth, and the standard six-speed manual gearbox shifts with accuracy.

The auto start-stop system is quick to fire when necessary, BMW’s engineers adding software that prevents the car from shutting down when it anticipates the need for a very swift response.

The quietness of the engine is matched by a relative lack of road and wind noise – the X3 is a comfortable place to cover big miles in.

Despite the new-found ride quality, the X3 retains its driver appeal on more challenging roads.

The steering is pleasingly weighted and direct, while keener drivers can specify Dynamic Damper Control and Dynamic Drive Control.

Add excellent eco credentials and competitive pricing and the X3 xDrive20d SE is sure to be a big hit among fleets.