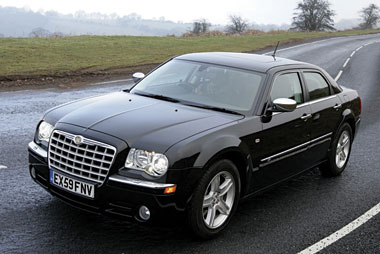 Fleet drivers choosing a Chrysler 300C will be making a statement: with its slab fronted nose, high waistline and 20-inch rims, this American bruiser is not for shrinking violets.

A snapshot survey in the office suggested the 300C’s styling would attract drivers with occupations somewhere between nightclub owner and mafia boss.

Gold jewellery was seen as an essential accessory.

It’s not exactly the image Chrysler would hope to portray, but it sold around 800 last year, more than the Audi A8 and Jaguar XJ and the third highest in the luxury saloon segment.

The 300C retains a large dose of its former parent Mercedes-Benz’s DNA, making it a smart choice – particularly since the revised version lopped £3,000 or more off the P11D price.

The refined, yet powerful 3.0-litre V6 diesel engine achieved 36mpg while on test, just above the official combined figure of 34.9mpg. It emits 215g/km of CO2, putting it in the 35% BIK band.

Although the official registration figures put the 300C in league with models like the 7 Series and A8, its more realistic rivals are the Saab 9-5, top-end Skoda Superb and Volvo S80.

300C plus points include space and equipment levels.

For a near two-tonne car, the 300C also handles well. Body roll is minimal and grip is excellent.

For the user-chooser that wants to stand out, the 300C doesn’t cost a great deal more than some other non-German lower-tier-premium executive saloons, although the initial buzz around the car in 2005 has fallen away.