"The C3 is practical, frugal and eye-catching – but so are its rivals." 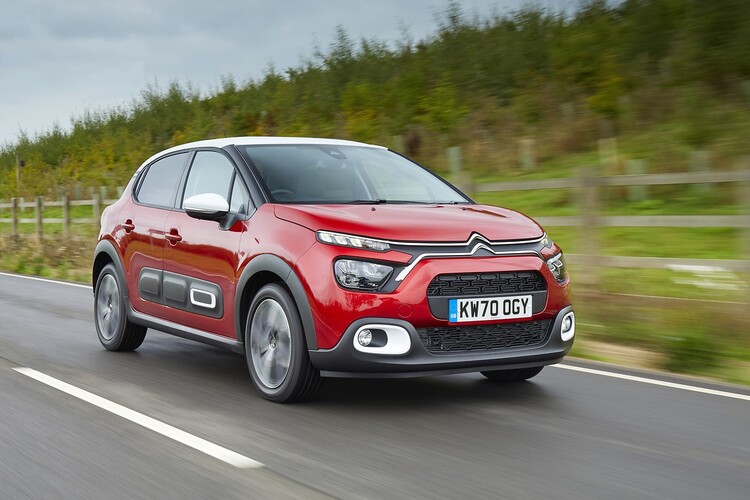 The small car segment has been fiercely led by the Ford Fiesta for as long as we can remember and its influence on other models is apparent. Cars such as the Seat Ibiza, Nissan Micra, Toyota Yaris and Renault Clio have all upped their game significantly and focused on sportier looks and sharper handling.

Citroën, perhaps, didn’t get the memo when it was updating the C3. Essentially, the new car is a mild facelift of the existing C3 that launched in 2016, and it sports the same curvaceous styling and comfort-focused chassis.

Now, there’s nothing wrong with having a USP and Citroën has steadfastly focused on comfort as its top priority. This means soft suspension and pliable seats. It’s also making a feature of the plastic cladding to protect the lower doors, with added detailing.

The new car is actually slightly cheaper than its predecessor and comes in three new trim levels, kicking off with the £14,875 ‘Sense’. Citroën predicts that the entry-level 83PS PureTech petrol engine will be the most popular, probably because it attracts the lowest prices.

We’d say the 110PS turbocharged version is a better choice. The lower-powered car just feels too slow, to the point of being frustrating. It also comes with a five-speed manual gearbox, which appears to have some gears in the front bumper and a few in the boot, so long is the throw of the lever.

The 110PS version has a slicker six-speed ’box and healthier dose of acceleration when needed. Choosing the more powerful engine has no effect on the claimed 52mpg average economy either and CO2 emissions jump by just 1g/km to 125.

All C3s have light steering and soft suspension. This makes them easy to drive in cities and relaxing on the motorway, but not great anywhere else. On country lanes the car can bounce around and lean into corners, making for an uneasy experience. The Advanced Comfort seats are similar: welcoming when you’re just sitting in them, but with flat bases they offer almost no support during the aforementioned cornering.

There’s plenty of space inside, front and rear, and some elements, such as the central trim panel and door pulls, feel plush and premium. Other parts feel a bit low rent, such as the indented plastic section of the door cards – but this is an inexpensive car.

Personalisation is a big part of the C3’s appeal and Citroën says there are 97 colour combinations available, achieved by the addition of optional coloured trim pieces and contrasting roof colours.

There is also a suite of driver aids, including parking sensors, lane-keep assist and a built-in dashcam, plus LED headlights across the range. Most functions, including the climate control, are controlled via the central seven-inch touchscreen. We’d prefer separate temperature controls, but the layout gives the interior a tidier design.

The C3 is practical, frugal and eye-catching – but so are its rivals. In cheaper variants, running costs are slightly more competitive, but with higher CO2 emissions, no electric version and underwhelming drive, the C3 doesn’t topple the class-topping Fiesta.