"Road and engine noise are both well suppressed at speed. There is noticeable wind noise around the door mirrors and windows, however. " 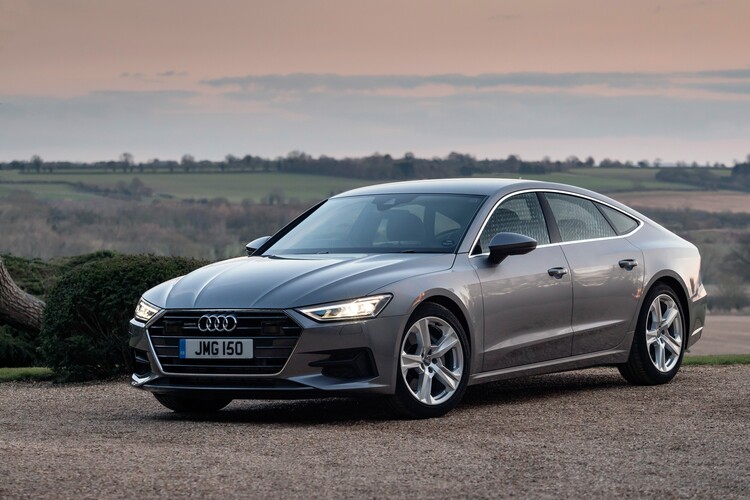 The A7 is Audi’s sporty iteration of the A6 Saloon, slotting below the luxurious A8 and wrapped in a sleek and eye-catching five-door coupé body style.

Sharing more than just a family resemblance with the A8 and A6 saloons, the new A7 Sportback benefits from a host of advanced technology – everything from safety and driver assistance, to infotainment systems and lighting.

All of this modern technology is accompanied by a luxurious and contemporary-feeling interior. Like the larger A8, the A7’s dashboard uses a blend of brushed metals, leather, piano black trim and a trio of screens controlling all of the car’s major functions.

Ahead of the driver is Audi’s Virtual Cockpit digital dials. The main 10.1-inch touchscreen controls the media, sat-nav, vehicle settings and phone, while the lower 8.6-inch screen replaces a traditional set of heating and ventilation controls.

The A7 Sportback comes with a choice of two V6 engines – one petrol and one diesel. Both are 3.0-litre in capacity and power Audi’s Quattro all-wheel drive.

They also use mild hybrid technology, which allows the A7 to recuperate energy recovered from braking and coasting to reduce turbo lag and extend the operation of the start-stop system.

Four-cylinder petrols and diesels will join the range at a later date, bringing in more economical and efficient options, which will have greater appeal to company car drivers.

Two trim levels are available: Sport or S Line. The latter comes with 10mm lower sports suspension, and it’s quite a firm set-up. In some ways it fits with the sharp look of the A7, but in others it doesn’t quite match up to the overall luxurious feel.

Road and engine noise are both well suppressed at speed. There is noticeable wind noise around the door mirrors and windows, however.

The transmission tunnel running through the centre of the car seriously impinges on legroom for a passenger in the middle seat, meaning that it is only suitable for a small child on a short journey.

Occupants of all shapes and sizes will easily get comfortable in the other seats, although the sloping roof does reduce rear headroom for the tallest passengers.

There’s no escaping how big the A7 is and you’ll notice it when manoeuvring in a town centre or a narrow street, for example.

Luckily, a reversing camera and all-round sensors are standard to assist with manoeuvring because visibility out the back isn’t the best.

The A7’s boot is the same size as its predecessor at 535 litres, but its big selling point is the huge hatchback-style bootlid, which means access to the load area is impressive.