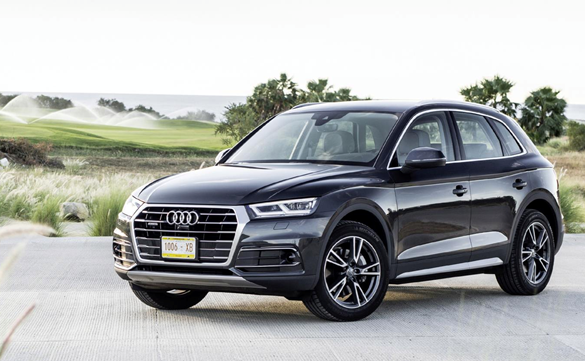 Audi’s new Q5 is set to have a tougher time than its predecessor which was launched back in 2008. Then the only other premium SUVs of equivalent size (in the UK, at least) were the BMW X3 and Volvo XC60.

The new model, which will arrive in the UK in spring 2017, will also be facing competition from the Mercedes-Benz GLC, the Lexus NX and Jaguar F-Pace, while a new X3 and XC60 are on the horizon.

Although it has come to dominate this premium SUV segment globally, the Audi needs to be particularly good to maintain its desirability and popularity here.

It shares a platform with the latest A4 and A5 range, which brings with it more efficient engines and new safety and connectivity technology. The Q5 has also slimmed down and, despite being slightly larger than its predecessor, it is up to 90kg lighter.

SE and Sport models come with xenon headlamps, while the S-Line has LED ones. All models are available with optional LED ‘matrix’ headlamps (which can adjust the main beam and avoid dazzling road users ahead) and ‘dynamic’ LED indicator lights.

A power-operated tailgate is also standard, as well as Audi Drive Select (where the driver can choose different throttle, steering and – with optional adaptive suspension – ride settings), plus front and rear parking sensors. Sport and S-Line models come with sat-nav as standard.

Production of the new Q5 has been moved from Ingolstadt in Germany to a sophisticated new plant at San José  Chiapa, making it Audi’s first Mexican-built model. Even in the pre-production models we drove there, everything looks and feels better than before. That said, many might be hard pushed to identify it as all new.

There’s a little more space inside, and the luggage compartment is also slightly larger. The rear bench is split into three, and customers can choose optional rear seat adjustment, including the base and seatback angle.

Audi’s ‘Virtual Cockpit’ 12.3-inch configurable instrument display is an option. The car is also compatible with Apple CarPlay and Android Auto smartphone systems, and can be specified with Audi ‘phone box’ which boosts network reception by using the car’s antenna, and also has an inductive charging pad for suitable phones.

Driver assistance and safety systems (all optional) include predictive efficiency assistant, which pre-empts the road ahead according to a selected route in the navigation and optimises fuel efficiency, adaptive cruise control and lane-keeping assistance. The latter two also combine in ‘Traffic Jam Assist’ to enable hands-free and feet-free travel in stop-start traffic.

Initially available with the 190PS 2.0 TDI or 252PS (22PS more than before) 2.0 TFSI engines, the range will later be joined by a 286PS 3.0-litre V6 diesel. For ultimate pferdestärke (PS), it is likely that we’ll see a high-performance SQ5 at some point in the model’s lifecycle, but the bulk of sales, especially to businesses, will be the 2.0-litre diesel.

The cars we tried on the launch were fitted with optional adjustable air suspension (a first for the Q5), while it’s also possible to choose adaptive damping with steel springs as an option. But Audi expects 96% of UK models to be fitted with standard suspension.

The effect of the car’s reduced weight, and new chassis components, certainly make it feel nimble for an SUV, if perhaps lacking the slightly more connected feel of the Jaguar F-Pace. Improved noise insulation leaves occupants feeling happily remote from the outside world.

The seven-speed S-tronic automatic transmission is slick and a new on-demand quattro four-wheel drive system, which leaves the rear axle uncoupled when extra traction is not required, helps improve fuel efficiency. CO2 emissions now start at 132g/km for 2.0 TDI SE and Sport models on standard wheels, with 133g/km for the S-Line.

Our test route included a 30-minute stretch of a sandy gravel track, which allowed the quattro system to be deployed full-time, giving no cause for concern about the responsiveness of the on-demand system. However, other manufacturers have been using four-wheel drive in this way for quite some time.

The Q5 is a remarkable improvement over its predecessor, and comfortably bests most of its rivals in terms of ability. Perhaps its main challenge, like many Audis, is not appearing sufficiently ‘new’ alongside the likes of desirable recent rivals, such as the F-Pace and GLC.