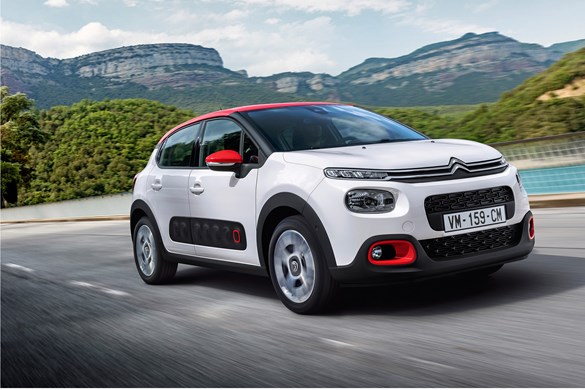 If you had to point to a particular model in the Citroën range that was underperforming versus the rest of the market, the C3 stands out.

Now that the DS 3 is a DS in its own right rather than a Citroën, the C3’s sales of less than 10% of the brand’s total in a segment that accounts for around a quarter of new car registrations, suggests there is some work that needs to be done.

The C1 city car has been a success and the stylish C4 Cactus is also proving popular, but the outgoing C3 – fair to say also one of the blandest cars Citroën has ever produced – would get firm C-minus on its report card even with the kindest spin on its abilities.

The new C3 seeks to change the image of Citroën’s compact hatchback and, with the DS 3 in another part of the showroom, it has the opportunity to come out from under the latter’s shadow.

There are styling cues from both the C1 and the C4 Cactus, plus a choice of nine body colours with two-tone options, with alternative colours for the roof.

The C3 can also be specified with a version of the Cactus’s ‘Airbump’ cushioned body protection. Unlike the C4 Cactus, C3 customers will have the choice.

Citroën also plans to stand out from rivals with a new emphasis on comfort for driver and other occupants, from the support of the seats, suppression of noise and the car’s ride quality, perhaps rediscovering what were considered typical Citroën characteristics a few decades ago.

The interior has a much cleaner look than before, and offers a little more space. But also features distinctive touches like C4 Cactus-style door pull straps.

We didn’t try a diesel version, but the 1.6 BlueHDi engine, available in 75hp and 100hp variants, offers CO2 emissions of 92g/km or 95g/km dependent on output, and will be familiar to anyone who has tried recent small cars in the Peugeot and Citroën ranges.

The three-cylinder petrol engines will appeal to many fleet operators because of the price premium on a diesel small car, and we tried the 82hp and 110hp versions. Both are smooth for three-cylinder motors, and the 82hp variant has more than adequate performance for a car of this size.

The C3 has all the ingredients to make a compelling case for itself as small car on a fleet, and has enough style for driver to feel they are driving something beyond the status of a compact hatchback.