"The Stonic has fairly stiff suspension, which helps to minimise body roll. Nothing in this segment is particularly driver focused and the Stonic is among the best in class in this respect." 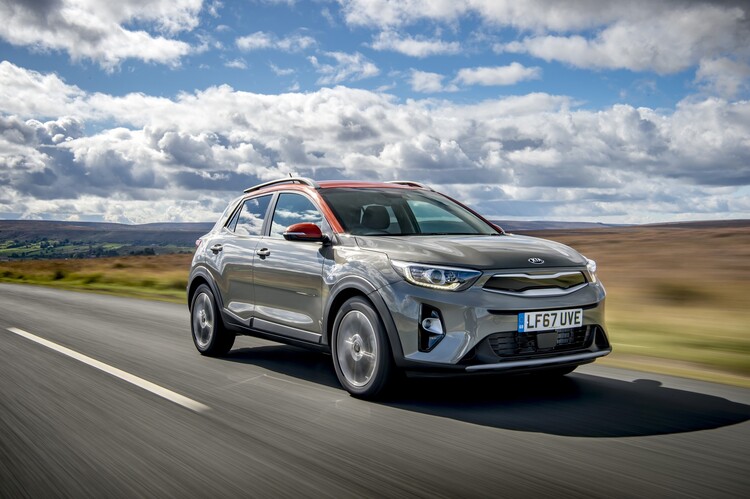 While there appears to be no sign of slowing the growth of the SUV segments, Kia’s latest entrant is expected to pick up sales in one of the most demanding new sectors.

Smaller SUVs are gaining popularity fast and Kia believes it will be a key category as drivers increasingly look for smaller cheaper city cars with SUV looks.

The Stonic is about as fresh as you can get. It has great crisp lines and is available in a range of bright paint finishes.

Inside, you find a simplistic interior layout befitting of this price bracket. The Stonic has a fairly sporty feel and is clearly aimed at a younger customer base with its black and silver colour scheme and range of connectivity options.

Key features such as autonomous emergency braking, sat-nav and lane departure warning with blind sport monitoring are fitted as standard to the range-topper.

We tested the 1.0-litre Turbo petrol model as it’s the expected best-seller. Its three-cylinder engine is fairly potent with 115PS and returns decent fuel economy.

Kia quotes 56.5mpg as the official figure, but we found 45mpg is more realistic with mixed driving.

A more frugal diesel version is available with 109g/km, however it will cost the driver around £100 per year more and lacks the refinement of the petrol motor.

Running costs for both models are aligned at 30p per mile, although we expect the real world fuel economy of the diesel to be better and more likely the cheaper option for those covering higher mileages.

The Stonic has fairly stiff suspension, which helps to minimise body roll. Nothing in this segment is particularly driver focused but the Stonic is among the best in class in this respect.

Interior space is comparable to a small hatchback, so it should suit small families. However, boot space of 352 litres puts it behind rivals such as the Nissan Juke and Renault Captur.

At motorway speeds the Stonic performs well with its range of driver assistance systems keeping things in check.

Road and wind noise is well supressed too, and the LED daytime lights combined with the more lairy paint-jobs ensure you can always be seen.

It’s hard to fault the Stonic as it fits the needs of its segment almost perfectly. Ageing rivals such as the Juke and Captur look dated in comparison and the Stonic offers a more attractive fleet package with its high specification, safety tech and low running costs.

Rivals are plentiful, this year we have already witnessed the launch of the Hyundai Kona, Seat Arona and C3 Aircross. Drivers can also consider the Peugeot 2008, Vauxhall Crossland X and Volkswagen T-Roc.