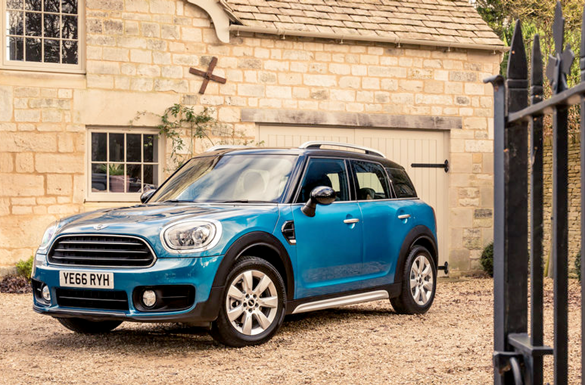 Oh look, it’s another Mini that’s got bigger – introducing the new Countryman. At 20cm longer than the outgoing model, it offers 5cm more rear legroom, and a boot that is 20 litres bigger than a Nissan Qashqai (and 100 litres larger than before).

The brand is pitching the car into the C Segment now, and believes it will rival cars such as the aforementioned Qashqai, Volkswagen Tiguan, Mercedez-Benz GLA and even the Range Rover Evoque.

Steve Roberts, head of corporate sales for Mini UK, said the brand had worked hard to ensure UK vehicles have a good level of standard specification to appeal to a fleet buyer.

“We know corporate buyers often are limited in their ability to add options, so we’ve added about £1,900 of specification as standard, like sat-nav which we know is essential.”

Around two-thirds of fleet vehicles previously added the Chilli pack, and Roberts expects similar numbers to do so on the new model. This includes LED headlights, part leather seating, bigger alloys and keyless entry.

Inside, the Countryman will feel familiar to anyone who has ever been inside a new generation Mini, with much of the trim, upholstery options and dash layout being very similar.

Granted, the interior is more spacious, and the ride position is slightly higher and more upright. But it’s easy to forget you’re in a family crossover when you find a winding country road, as the car has plenty of power and handles delightfully.

The more powerful Cooper SD model, available in automatic transmission only, generates 190PS, and 121g/km CO2 – Mini says the SD has been popular with small- and medium-sized enterprises (SME) buyers on the previous generation car.

Other new features for the car include an £850 ‘activity pack’, which bundles together a number of lifestyle options that Mini thinks will appeal to a Countryman driver.

An electric bootlid joins folding and sliding three-way split rear seats, along with an increased fuel tank – from 51 litres to 61 litres. The pack also includes a ‘picnic bench’, which integrates into the false boot floor, and provides a padded seat and rear bumper protector.

The plug-in hybrid variant joins the range in the summer – the Cooper SE. Set to be priced similarly to the Cooper SD, this car will produce 136PS from a petrol engine, along with 88PS of electric power. With 49g/km CO2, the brand expects it to be popular with salary sacrifice buyers.