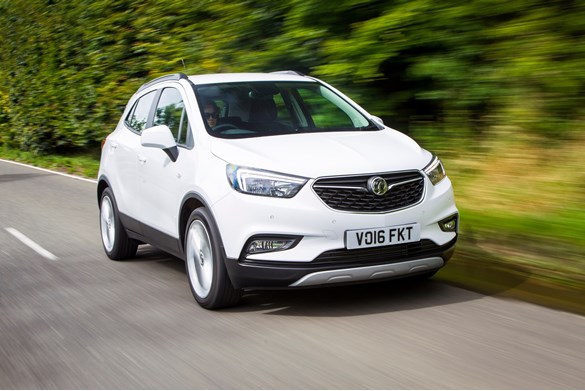 Vauxhall is adding an ‘X’ to all of its future SUV and crossover models to distinguish them, and its compact SUV, the Mokka, is first to be renamed.

Confusingly, Tech Line is still available on the recently refreshed Zafira Tourer and on the current Astra and Insignia.

There is a good level of standard equipment on the Mokka X. OnStar, which provides a high-speed 4G LTE mobile network, emergency response notification and stolen vehicle recovery technology, is standard across the range. However, there is an annual subscription fee of £89.50 after the 12-month trial period. Wi-Fi is free for up to three months or 3GB of data volume usage – whichever comes first.

Vauxhall has also introduced the latest generation of its IntelliLink infotainment system to the Mokka X, with two versions available: the R 4.0 IntelliLink and the Navi 900 Intelli-Link. The latter is standard on Design Nav and features an eight-inch colour touchscreen sat-nav.

All IntelliLink versions are compatible with Apple CarPlay and Android Auto, enabling the driver to attach their smartphone via a USB cable and project their apps from their phone to the IntelliLink system.

Mokka X has a new streamlined dashboard, inspired by the Astra, with the new integrated touchscreen allowing buttons to be removed.

Optional LED adaptive forward lighting, which adjusts to the driving situation and changes the lighting pattern of the headlamps, is new to the range. Vauxhall suggests LED offers around 30% more light at low level than halogen and reduces the risks of night-time driving.

There are nine different lighting modes, including a mode for rural areas (at speeds above 34mph), urban areas (for speeds under 34mph) and a parking light mode, which illuminates the area around the vehicle when driving or reversing into a parking space.

A new six-speed manual 1.6-litre CDTi 110PS diesel engine is available at every trim level. In Ecoflex guise it has a combined fuel economy figure of 72.4mpg and CO2 emissions of 103g/km, putting it into the 20% benefit-in-kind (BIK) tax band for the current tax year.

However, Vauxhall suggests that the 1.6-litre CDTI 136PS Ecoflex, which has a combined fuel economy of 68.9mpg and CO2 emissions of 106g/km and falls into the 21% bracket, will remain the most popular fleet model.