"The exterior styling is bold but it does look brilliant from every angle. Its lines are superb and you really can’t find anything not to like about the exterior." 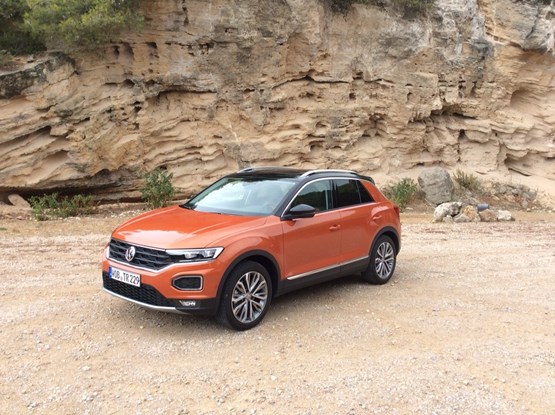 Volkswagen’s all-new T-Roc crossover slots in beneath the Tiguan as the company’s first compact SUV, offering drivers a blend of agility and toughness.

The exterior styling is bold but it does look brilliant from every angle. Its lines are superb and you really can’t find anything not to like about the exterior. Crisp lines all around the car make it look every bit a purposeful and dynamic SUV.

Inside, the interior is clever yet simple. There are no fancy pieces of plastic or hidden storage compartments with unwanted lids that tend to rattle after a few miles of driving.

The top of the dash is almost flat and uncluttered, which does not cause any reflections in the windscreen. The major controls are easy to use and are intuitive. While the seats are firm, yet comfortable, and make the T-Roc the sort of car you could drive for many miles without any aches or pains.

There is plenty of rear seat room, for leg, head and shoulders and the boot is largest in class, with 445-litres of cargo capacity.

The first car we drove was powered by a 2.0-litre TDI engine which produces 150PS, it can reach 62mph in 8.4 seconds and feels very smooth and is quiet.

It suits the T-Roc perfectly, but as diesel sales are diminishing, it is unlikely that many sales of the T-Roc will feature this engine.

A more frugal diesel will also be available when the car is available in the UK. It’s a 1.6-litre 115PS unit, the same as found in the new Polo and Golf. It is likely to offer the lowest CO2 emissions in the range but prices and specifications are yet to be released.

We also tried a 2.0-litre petrol version. This engine produces 187PS, and we quickly found out that this is more than enough.

This engine proved to be quick and quiet. The ride and handling was impressive and it took corners with poise.

The car also had 4Motion all-wheel-drive and we gave it a try on some sand-dunes. It all worked perfectly, and got us out of any difficulties without any problems. There is an emissions penalty though - it emits 155g/km of CO2 so is unlikly to win much fleet interest.

Volkswagen UK say that around 80% of all T-Roc sales will be petrol, and this percentage may prove even higher.

Unfortunately neither the 1.0-litre or 1.5-litre petrol engines were available to test but having driven both of these engines in other Volkswagens we feel confident that they will work really well in the T-Roc.

Not all prices have been announced, but entry-level models are expected to start around £19,000.

Volkswagen have got this five-door SUV just about right in all aspects, it looks great, drives well and has the right choice of engines and gearboxes.

It is well put together with a high level of quality and has a long list of standard equipment, safety features and infotainment.

As the SUV gets more and more popular, a trend which is likely to continue, Volkswagen is launching this car at exactly the right time.