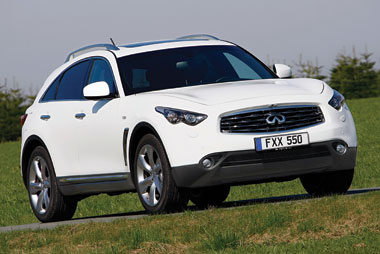 Nissan’s luxury arm, Infiniti, hasn’t been a big hitter on the fleet or retail market.

The company has been around for 20 years but it broke into Europe only in 2008 and had modest aspirations for its petrol-engined cars.

Infiniti knew it wouldn’t succeed in Europe without a diesel engine, though, so it is now offering its large 4x4 with a 3.0-litre V6 turbodiesel engine.

With average fuel economy of 31.4mpg and emissions of 238g/km, the FX30d is a step in the right direction.

Infiniti has high aspirations for the car.

It claims previous models generated interest from corporate clients but many were waiting for a diesel.

That’s competitive with diesel versions of the Audi Q7, BMW X5 and the Porsche Cayenne, but each of those emits less than 200g/km of CO2. Don’t discount it just yet, though.

If you can foot the BIK bill and want to stand out from the crowd, then the FX is certainly worth a look.

Heated and cooled leather seats, a rear-view camera, parking aids, 20-inch alloy wheels and a seven-speaker sound system are just a few of the goodies that come with the standard GT model.

Infiniti claims the FX30d has a potential 26% price advantage over its rivals when you factor in the kit.

It’s good to drive too. The FX is set up to perform better on the road than off, and it’s more engaging than most 4x4s behind the wheel.

The only letdown is the seven-speed automatic gearbox, which is quite jerky if you change gear via the wheel-mounted paddles.

It lags behind rivals in terms of emissions and running costs but, if you can stomach those (roughly £1,000 more a year than an X6 on 20,000 miles), there’s a strong case for the FX30d.

A generous equipment list and fine diesel engine add to the appeal.