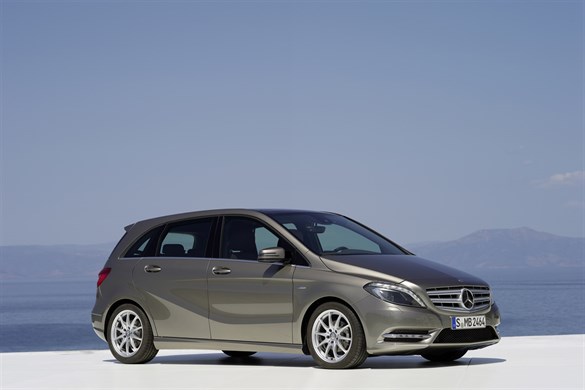 Higher-value pricing and substantial gains in operating efficiency are set to help Mercedes-Benz win a greater share of the UK business car market.

But sleeker lines, a raft of advanced features and a long-awaited ‘wow’ factor for the B-Class should also prove to be key components in the company’s drive to close the gap on its rivals.

“This new version of our sports tourer allows us to draw the battle lines for the next move in our campaign to match the success of Audi and BMW in the corporate sector. At the moment, we just can’t compete with the A3 and 1 Series – but I promise you that things will be different from next year.”

As the first of five new compact models to be released over the next four years was launched, Savage told Fleet News:”A lot of work has gone into providing this car with the ‘wow’ factor that should give it wider appeal.

“It is now up to 21% more fuel efficient, has greatly improved tailpipe emissions, is more aerodynamic and has fantastic engineering features to improve driving dynamics and boost safe travel. I’m confident it will play a key role as we close in on the competition.”

Due out in spring, the second-generation B-Class is expected to achieve around 7,500 registrations in 2013 – 1,500 units up on this year. It will be closely followed by the new A-Class and a four-door coupé is due in 2013.

Even though pronounced wheel arches and side skirts lift kerbside appearance, interior revisions have a dramatic effect and a sat nav screen resembling a tablet computer gives a stand-out look to the dash panel.

Roadholding is improved by lowered ride height and a new rear suspension and the firm’s latest diesel motor is impressive in either manual form or with the new seven-speed dual clutch transmission, a £1,450 option.

Collision prevention equipment is standard across the range – a first in the sector – and SE trim includes active park assist, air conditioning, power windows and a leather-trimmed steering wheel.

The B-Class sheds its dowdy image and is transformed by a thorough makeover inside and out. Premium positioning carries a pricing penalty, but this is an accomplished all-rounder that oozes refinement.