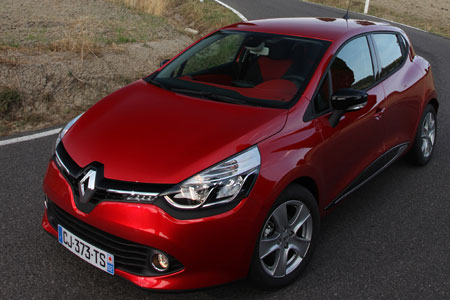 A year ago Renault took dramatic action to avoid a crisis in the UK. It removed less popular models from sale and scaled back on low profit fleet business after admitting its significant contribution to the manufacturer’s volume.

Now heavily reliant on the Megane and Clio for UK sales, updates and new models have to count and ensure they have broad appeal.

Clio is a tougher test as much has happened in the small car sector in the seven years since the outgoing model made its debut. For Renault, the new Clio is also the first car to be designed under Laurens van den Acker, whose Dezir coupé concept car of two years ago set out the future design direction for its cars.

Although there are small elements of Dezir in the new Clio, there are few similarities beyond the more obvious larger Renault badge.

The new Clio has grown slightly, unusual at a time where car manufacturers seek to reduce weight and use space more efficiently. It is both longer and wider than the car it replaces, although it has lost some height. The overall effect is to give the Clio a more purposeful stance.

Renault said that although it had become relatively commonplace to replace a car with a slightly smaller one, it produced figures to show a third of Clio buyers across Europe were downsizing from a larger car, so making the Clio smaller might be off-putting for some of its buyers.However, the car is lighter than its predecessor.

The new Clio is also available only as a five-door hatchback. No doubt there are economies of scale in producing one type of Clio body, and Renault claims the new profile almost gives the car the appearance of a three-door.

We drove the new version of the 1.5 dCi 90 and the new 0.9 TCe three-cylinder petrol engine. Both of these are available in Eco versions with lower CO2 than standard, the former setting a low benchmark of just 83g/km, while the petrol variant can drop as low as 99g/km.

Renault also brings new technology to the small car sector with the new Clio. Bluetooth is available from the entry-level version, which is able to play music stored on Bluetooth-enabled audio players.

All audio systems in the Clio come with jack-plug sockets and USB ports for portable music players.

Clios are fitted with a multimedia interface with touch-screen display, and models with sat-nav use an integrated Navteq system.

Available as an option from Dynamique upwards, Renault R-Link provides a link between the car and the connected world outside thanks to a seven-inch touchscreen display, voice commands and, in a market first, a home page that can be personalised by the user for safe, simple access to key functions, without drivers having to take their eyes off the road.

The manufacturer has also launched the R-Link Store, where users can view or download a comprehensive selection of apps from their car or computer.

A connection with the car’s own electronic systems permits access to an advanced eco-driving function (Driving eco²) which analyses the driver’s behaviour and provides advice to help reduce fuel consumption.

The Clio feels much more up-to-date inside, thanks in part to the touch-screen interface on the dashboard.

We spent most of our time in the diesel, which is remarkably quiet and refined, while it also has enough mid-range shove to make the Clio feel surprisingly nippy.

Most of our test route took in fast twisty roads, which hardly felt like the typical environment for a mid-range Clio, but it also revealed that the dreadfully over-light steering of the previous model had been banished to history.

The new Clio feels nimble enough threading its way around tight corners and hairpins, so we can only assume it will be just as adept in the cut and thrust of urban traffic.

Comfort levels are good on the whole, helped by low noise intrusion, but the ride can be rather firm, particularly on the optional 17-inch wheels found on the Dynamique S.