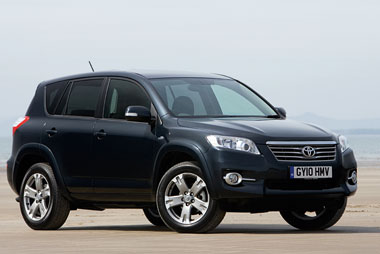 This news might have passed you by because the world’s most successful compact 4x4 is the unassuming Toyota Rav4.

The Rav4 hasn’t enjoyed as high a profile in the UK as some other 4x4s, but it has perhaps been the one most geared up for fleets in recent years.

Modest running costs thanks to strong residual values, affordable fuel costs and reasonable SMR expenses give it a little more fleet appeal than it has credit for.

It was also the first car in its class to fall under the 160g/km writing down allowance threshold, and not by resorting to front-wheel drive.

An evolution of the third-generation model launched in 2006, the latest Rav4 has a cleaner and perhaps less rugged looking front end.

And the revision arrived at about the same time as Toyota’s upgraded five years/100,000 miles warranty.

The diesel Rav4 comes with a 148bhp engine and produces a hefty 251lb-ft of torque, so will spring from 0-62mph in a tad over 10 seconds.

Light steering and comfortable controls combined with an easy gearchange make driving the Rav4 less of an adventure than its jacked up appearance might suggest.

While the Rav4 with four-wheel drive will feel more surefooted than other compact cars, the car has evolved over the years to retain the road-manners of a conventional car.

Under normal conditions it sends all drive to the front wheels, but when conditions become challenging, up to 45% of torque can be sent to the rear wheels.

Inside there is enough room for five adults to sit in comfort, while the dashboard layout is arranged in a distinctive split-level, with a dual-chamber glove compartment.

Unfortunately there are still more hard plastic surfaces within reach of occupants compared with a few other 4x4s in this price bracket.

Although the engine performs well enough, it isn’t the quietest diesel on the market, and seems particularly noisy when starting from cold.

However, once on the move, the Rav4 feels refined with low levels of noise intrusion.

If there’s one criticism of the Rav4, it is that it is perhaps lacking in personality compared with cars like the Freelander, Nissan X-trail and Volvo XC60.

As the Rav4 does not use stop/start technology, Toyota still has some room to improve the car further.

But if costs are in its favour, it can perhaps afford to stand out less than some of its rivals.

The Rav4’s list price is £1,000 higher than the least expensive model in the comparison, but it is very well equipped for the money and BIK should be offset by lower CO2 emissions.

The Rav4 is the only 4x4 in this comparison with CO2 emissions below 160g/km, putting it in a more favourable position than the others when it comes to capital allowances.

Best fuel consumption in its class helps the Rav4 to a healthy advantage over the other three models here, although they aren’t that far behind each other.

In pure running cost terms the Rav4 comes last in this comparison by the narrowest of margins. Good fuel consumption and decent RVs can’t quite overturn the initial price premium.

Rav4 is comparitive against Tiguan which has tables turned on it compared with costs above.Lowest contract hire rates from www.comparecontracthire.com (excluding VAT).

All four of the vehicles here are fairly closely matched, although the Rav4’s high-ish front end price appears to put it at a disadvantage.

Its high specification and modest fuel costs mean it’s still worth a look, and it has plenty of driver appeal. But it appears the Tiguan would be the safest fleet choice of the four.