Tusker to offer both franchised and independent SMR options 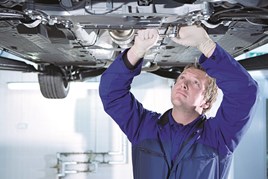 Tusker wants to offer fleets a choice between franchised dealers and independents for servicing, maintenance and repair (SMR).

The leasing company’s chief marketing officer Paul Gilshan told Fleet News that it uses a variety of dealers for servicing, but is looking at adding an option for drivers who want to get their car serviced and repaired only by the franchised dealer network.

“It’s about giving our drivers the choice,” he said.

Gilshan declined to comment on specifics around a pricing structure or the new programme, but it is thought that fleets leasing on a ‘with maintenance’ SMR contract that select independents will enjoy a lower lease price, while a franchised dealer service will come at a premium.

Tusker, which operates a risk fleet of 15,627 vehicles, is a market leader in the UK with its salary sacrifice scheme which comes with insurance, servicing, MOT, road tax, repair bills and breakdown cover included.

“This helps to give a geographical spread and some of the bigger leasing companies will even filter jobs depending on complexity or location of the driver.”

However, Sandall said there is now less of a defining line between the service independents and franchised dealers offer, with some independent businesses offering comparable levels of service.

She said: “The benefits of coffee, a croissant and free wi-fi at a franchised dealership are negated if drivers are using collection and delivery services.”

Sandall said fleets would need to look at their requirements and compare what is offered if they did opt for independent or franchised dealers. For example: is a courtesy car available? Are there any additional extras that will be charged for?

Peter Bonney, fleet controller at the Salvation Army, said other leasing companies have suggested using independents for servicing but have not suggested a reduction in lease cost in the past. The Salvation Army leases its vehicles with maintenance included.

According to the 2015 FN50, around three-quarters of leasing companies’ SMR business for cars and vans is with franchised dealers and one-quarter with independents.

Bonney said: “We encourage our drivers to contact their leasing company and ask them to arrange a service.

“By default, this means that if the leasing company so decided they could use an independent. In practice, this only normally happens when there isn’t a franchised dealer close to the driver’s location.”

Bonney said it’s possible warranty work at independents could be more complicated to manage for the leasing company.

Vehicles must get serviced according to the manufacturer’s recommended schedule and criteria using only manufacturer-approved parts.

However, it is not obligatory to get vehicles serviced by a franchised dealer during the warranty period.

Warranty work at franchised dealerships can sometimes be more straightforward due to the dealership having a direct line of communication to the manufacturer to approve warranty work.

Bonney said: “In all probability, someone is going to have to move the car to a franchised dealer for the warranty work.

“Even if the independent undertakes to liaise with their local franchised dealer to get warranty work carried out, there is going to be a delay in getting that vehicle back on the road and then you’ve got a downtime problem.”

Bonney also said fleets would have to think about whether the absence of a main-dealer service history may have a negative impact on residual values, particularly with prestige marques.

He asked: “If it’s known that a car will be having its services done outside of the dealer network, will a lower residual value percentage be applied to the leasing calculation?”

Debbie Floyde, Bauer Media fleet and risk manager, said most businesses would look to take on the cheaper option if it was given to them, particularly with some strong independent garages offering good service to fleets.

She added: “Our vehicles have budgeted maintenance and I take some of the risk on that.

“I can see the logic in going for independent-only servicing but I don’t think franchised dealers or manufacturers would be pleased if the rest of the leasing industry started to lean in this direction.”