Fleet decision-makers across the country are looking at the potential of hybrid and pure electric powertrains to help drive improvements in air quality.

Towns and cities are considering restrictions on the most polluting vehicles, while the Government wants at least half of all new cars sold and 40% of the new van market to have to emissions of less than 50g/km of CO2 by 2030.

Political pressure at a local and national level is forcing a dramatic change in the future make-up of car and van fleets.

One company has been ahead of the game since it was founded six years ago. Farmdrop operates a fleet of pure electric vans, primarily  in London, which faces illegal levels of air pollution.

The capital has already introduced a ‘toxicity charge’ on top of the congestion charge for those wishing to drive a pre-Euro 4 vehicle into the city.

It will be replaced by the world’s first ultra-low emission zone (ULEZ) in April 2019, which will target cars, vans and trucks that don’t meet the latest emission standards. Non-compliant cars and vans will be charged £12.50 per day in addition to the daily £11.50 congestion charge.

“For us, it’s another reason to be running electric vehicles (EVs),” says Farmdrop fleet manager David Brown. “EVs are exempt from the congestion charge.” 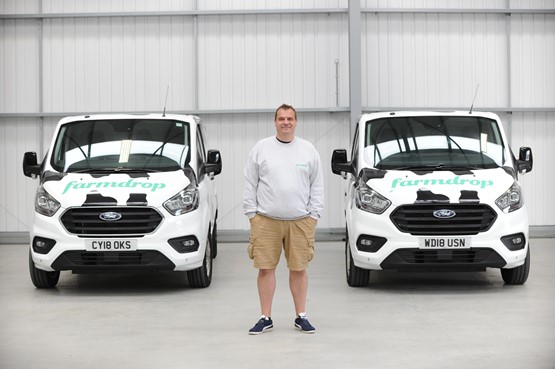 The company’s vehicles will also avoid having to pay anything to enter the new ultra-low emission zone and will be ahead of the curve when zero emission zones start to be introduced in the capital.

However, Brown says: “Air quality is a challenge not just in London, but across the country. It’s something operators of all sizes are having to face up to.”

Outside of the capital, local authorities, ordered to consider implementing clean air zones to target some of the country’s worse pollution hotspots, are in the process of submitting final air quality plans for Government consideration.

Brown says: “The environment has always been the company’s number one priority; it’s what shaped its fleet policy from the day the business started.”

Farmdrop has used pure electric vehicles since launch, earning it Go Ultra Low Company status in July 2016 and a Fleet Hero award for Ultra Low Emission Fleet in November of the same year.

Earlier this year, it was crowned Eco Fleet of the Year at the Fleet News Awards, with the judges commending its commitment to putting electric at the core of its business strategy.

Farmdrop’s mantra is go green and go efficient, with deliveries being made by its fleet of 16 Nissan e-NV200s and eight Renault Kangoo ZE pure electric vans in London and Bristol.

The online food delivery company distributes fresh produce to consumers that is sourced from local farmers and fishermen. It says its mission is to fix the food chain and protect the planet by employing a pure electric fleet.

Phil Eaves, director of supply chain at Farmdrop, told Fleet News, last year: “It’s embedded in the culture of Farmdrop, so switching to diesel would be an unthinkable shift in terms of what Farmdrop stands for, both internally and for our customers.”

EVs fit with Farmdrop’s sustainable ethos, but its success in the market has now forced it to consider something it thought “unthinkable” just 18 months ago.

A limited choice of electric vans and load capacity constraints has left Farmdrop with no choice but to turn to diesel, in the short-term at least. 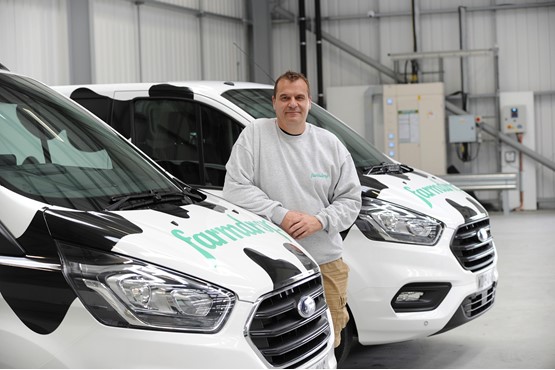 Load capacity of that limited line-up doesn’t match Farmdrop’s demand from increased orders and range is becoming a greater issue as delivery areas get further away from the vehicle’s base.

It is a problem the growing business has become more acutely aware of following the relocation of its headquarters and hub from Bermondsey, close to central London, to a new facility in Enfield, north London, just inside the M25.

A hub in Bristol serves customers in the south west, while the new Enfield hub will serve customers across the capital and will be base for all but one of its EVs, which will be located in Bristol.

However, having built up its London business in areas that were easily served by its Bermondsey HQ in the south of the capital, its new north London base poses a further challenge when it comes to operating the plug-in fleet.

Brown, explains: “We want to be able to run electric, medium-sized wheelbase vans down from Enfield to Leatherhead and Croydon, but that’s not possible. You can’t get down there, do your drops, and come back without having to factor in an hour or so downtime recharging.

It already operates two diesel Mercedes-Benz Sprinters and one Ford Transit Custom for collections from producers, but not currently for deliveries.

The electric vans are charged overnight before going out on the road from 7am to 1pm and then again from 3.30pm to 9.30pm, with delivery routes, on average, around 60 miles.

Brown explains: “It gives us about a two-hour window (during the day) where you can get the guys back in and the vehicles on-charge to top up, ready for when they have to go out again.”

There is no fast-charging facility at the new London hub – the cost was prohibitive and it’s not possible to fast-charge the Renault Kangoo ZE anyway, says Brown.

Currently, vehicles are charged at Enfield via a series of 13-amp charge points, with plans to upgrade to a 32-amp (7.2kW) system in the near future.

“We don’t need it (a fast-charging facility) thanks to our route-planning software,” explains Brown.

Routes are optimised allowing deliveries to be made on a single charge, done when vehicles are back at the hub.

In Bristol, roadside-charging is more of a necessity, because of a bigger delivery area and, as a result, longer routes sometimes have to be undertaken.

Brown says: “They will plug-in (to a public charge point), go and have a break, come back and the van’s ready to go again.”

In London, operating out of its new hub, Brown says drivers will have to utilise public charge points on some routes.

But, constrained by only being able to carry 12 orders in the e-NV200 or the Renault Kangoo and facing greater ranges than before, he says diesel will take the strain on a small percentage of orders – some 3-4%. 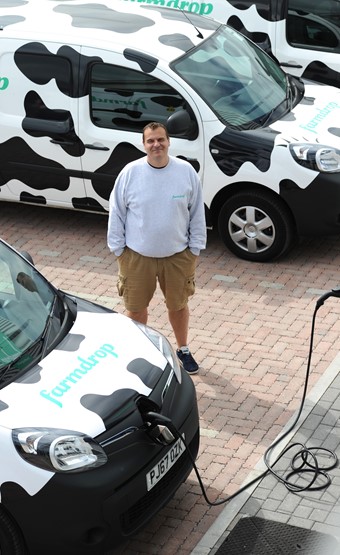 Farmdrop has faced multiple challenges running EVs: the lack of a market-ready refrigerated electric van and problems with the public charging infrastructure.

It quickly realised a refrigerated electric vehicle would use too much energy and reduce the vehicle’s range, so it adapted the way it keeps food chilled by using thermal packaging to keep produce fresh.

Farmdrop is also fortunate that by employing both short- and longer-term leases for its EV fleet through specialist EV leasing company Drive Electric, it avoids any residual value risk and can flex vehicle numbers according to demand.

“It also means we can decide to choose an alternative, while we don’t know where the next electric van is coming from, what size it’s going to be and what range it’s going to have,” says Brown.

The Ford Transit Custom hybrid trial has sparked Brown’s interest, however. It involves a fleet of 20 hybrid vans being put through their paces by a number of London-based fleets.

Scheduled for volume production in 2019, the Transit Custom PHEV has an advanced hybrid system that targets a zero-emission range in excess of 31 miles and features the EcoBoost 1.0-litre petrol engine as a range extender.

The EcoBoost engine charges the on-board batteries when longer trips are required between charging stops.

“We have a pure electric ethos, but at some stage the hybrid route may be an option for us,” admits Brown. “It would definitely be a better option than diesel.”

Farmdrop’s fleet manager took on the newly created role four months ago and, having seen the operation at close quarters as a shift manager at its Bristol hub, he was a quick convert to electric vehicles.

The re-charging of vehicles and how that is factored into delivery schedules is a fascinating aspect of running a pure electric fleet, says Brown.

“It is a world away from when I started as a transport manager – then you just filled up with diesel and off you went.”

He adds: “I’ve always been a transport manager – a CPC (certificate of professional competence) holder in the combustion engine age; but I am sold on electric vehicles.”

Brown believes there is real scope for other companies, especially couriers that have a small, postcode-based route, to consider pure electric.

He says: “It wouldn’t work for every company, but the technology would suit many operators.”

As for Farmdrop, Brown believes the  challenge going forward is whether manufacturers will be able to produce new  vehicles in significant numbers to match the job Farmdrop, and other operators, will increasingly need them to do. 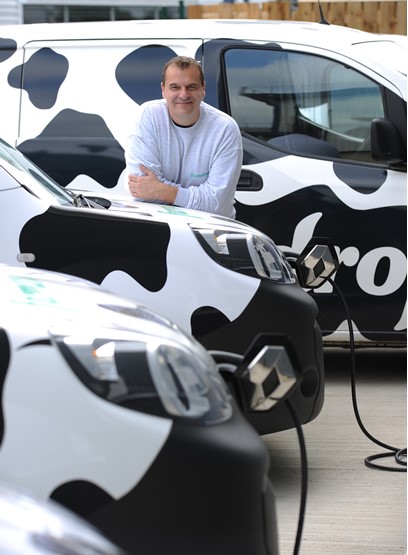 Fitting behavioural telematics to Farmdrop’s fleet of electric vans has seen ‘fuel’ usage fall by more than a quarter.

Already operating a route-planning tracker-based system to schedule its deliveries, it decided to employ an additional system to measure driver behaviour.

“From the driver management perspective, it’s been fantastic,” says fleet manager David Brown. “It gives us real insight and the ability to intervene when appropriate.”

The firm chose LEVL Telematics to provide the Geotab platform throughout the fleet and within just a few months, Farmdrop has seen double-digit improvements in driver behaviour and fuel/energy use.

With a custom-tailored solution and a driver behaviour add-on, Farmdrop was able to monitor electric energy use and stimulate engagement among its drivers for some impressive early results.

It has seen a 33% reduction in incidents of poor driving per mile, as well as a 27% cut in the kW/mile needed to execute routes in London, Bristol and Bath.

Compatibility with EVs was another key Geotab advantage, says Brown. Another telematics supplier being considered could not read the information coming out of the vans’ electric power plants.

The use of league tables and performance-related pay, which takes account of driver scores, has helped employee buy-in.

“All we expect is for drivers to wear their seat belts, not speed and to basically drive in a normal, safe way,” says Brown. “It’s a more carrot than stick approach and the guys have really responded well.”

Farmdrop: “Diesel would be unthinkable”

Farmdrop operates an all-electric fleet which suits its environmental ethos and saves money, but it has had to overcome challenges. Sarah Tooze reports